All The Water In The World - Karen Raney


Karen Raney’s debut is a moving and perceptive novel about how the experience of mortality and grief can shape how we live our lives.


The novel is narrated through the alternating voices of mother and daughter Eve and Maddy, and flits back and forth in chronology. 16 –year old Maddy has terminal cancer, and Raney explores how this influences Maddy’s thoughts and feelings on several levels. In particular, the sheer loneliness of it, the fear of the unknown, and the need to leave behind a positive legacy. Eve’s narrative is interwoven with Maddy’s, and takes place after Maddy’s death. Eve reminisces about Maddy and her own relationships with her parents, her partner Robin, and Maddy’s estranged father Antonio. When she stumbles across a secret correspondence between Maddy and Antonio, she starts to wonder why the two of them parted ways, and discovers that maybe the version of events she told herself and her family wasn’t strictly accurate. 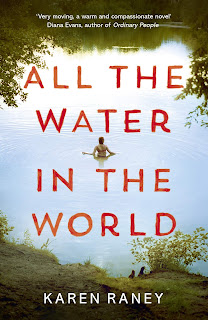 There is plenty to praise about this book. Raney’s use of language and imagery is powerful throughout. Her linguistic rendering of Maddy’s disintegration of consciousness in the Coda, with its fragmented sentences, lack of punctuation and merging of viewpoints, might not be to everyone’s taste but it is an original and striking imagining of the internal process of dying. Her descriptions are vivid; her use of motifs such as water and the natural world effectively evoke a range of emotions, and although I sometimes found her use of metaphor a little hit-and-miss, when she gets it right she really gets it right.  For instance, the significance of the rat-snake felt heavy-handed to me, but the extended metaphor surrounding Robin was beautifully done. He is so like his bird-namesake in every way, with his musicality and the way he builds living spaces out of wood for his loved ones, such as the nest-like attic room perched among the treetops.


Raney also deftly portrays the complexities of her characters’ feelings. Their emotions are often tangled and ambivalent, but there is a positive thread running through them all. I loved Maddy as a character – she was brave, clever and compassionate, and I loved the way she tried to live her remaining time on her own terms. With Maddy’s environmental campaigning and her art, Raney draws a poignant link between the loss of a child and the destruction of the world we inhabit. Eve’s world will never be the same again, and the novel explores how she comes to term with this knowledge.

What I didn't love:

I did not warm to Eve’s character in the same way I did to Maddy’s. Although she is a loving and devoted mother, Eve’s sorrow and negativity seem to hang over and taint every incident in the book, which makes for a sense of discomfort when reading the parts narrated by her. Her apathy contrasts strongly with Maddy’s productivity even in Maddy’s own moments of despair, and she has a constantly prickly attitude towards others. This is probably a somewhat accurate description of someone who is grieving deeply, but somehow I could not feel much for her beyond the obvious sympathies I had as a fellow parent.


Perhaps this was the point though – that grief can turn people insular and make them seem selfish and self-absorbed, ignoring the feelings of their family and friends around them. Eve knows on some level that she is pushing people away, but she does not know how to stop, nor is she sure she even wants to. Her grief is so consuming that it distorts her better judgement and impulses, leading her to make some questionable decisions.


I wished that some of the minor characters had been a little more fleshed out and woven into the story better. For instance, Robin is always in the periphery but I felt as if I never really got to know him properly, until the last few chapters of the book. Even Antonio gets more airtime, not that it does him any favours. I understand the thinking behind this decision, but I felt that Robin deserved so much more as a character. Similarly, from the way we were introduced to Norma, I expected her to have a bigger role in the story than she did. As it was, she felt like a plot device – maybe to show how NormaL her life was in comparison to Eve’s.

I found this book to be an insightful exploration of the ripple-effects of grief and living with terminal illness. It would appeal to fans of John Green and Jojo Moyes but has a more literary style, with imagery and references which reflect Raney’s artistic background.


Caution: difficult themes – illness (cancer), death. Tread carefully if you are sensitive to material like this.


All The Water In The World is by Karen Raney and published by Two Roads Books, an imprint of Hachette UK.