A lyrical, reflective journey through the course of one London summer, the relationships and encounters that shape a life, and coming to terms with emotional trauma. So often, while reading this book, I felt I was drifting out onto open water on the currents and eddies of Nelson’s beautiful prose. The central current that carries the narrative forward, is the romance at its heart. But swirling and coursing around and beneath it, are stories about pain, about loss, about living an authentic life and seeing yourself as others see you. 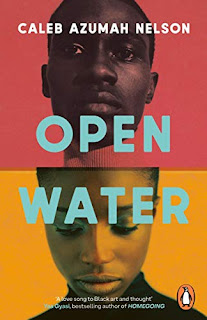 A couple of stumbling blocks: one was the choice to narrate in the second person. Because the main protagonist shares a lot of characteristics with Nelson himself, I read it as an attempt to put some – but not too much - distance between the narrating persona and the protagonist. However I was never really sure whether the narrator is Nelson speaking to himself, or whether he is addressing a collective young black male entity. The other was that sometimes the emotional impact was sacrificed to the style or technique, for instance with some of the deliberate use of repetition. I would read something and take a moment to appreciate the language, thinking ‘wow, that was good!’ but then I think Nelson must also have thought the same thing, because he does it again. But unfortunately, the second time I read the phrase or sentence, it didn’t have the same impact as the first.

Nevertheless, the language is fluid and evocative and, for a jaded old thirty-something like me(!), it certainly brought back a sense of being in your twenties and experiencing the blossoming of a new relationship - the doing nothing except being in each other’s company together, the long phone calls, the seeing each other off at train stations when it becomes a long-distance thing, will all be recognisable to anyone who has been through it. I also loved how London was like a character on its own – the feeling of summer evenings in the city, the crossing of paths with friends and strangers.

Amongst the sweetness of the romance, the book also has a darker flavour in the way it alludes to issues such as the individual and generational impact of institutionalised racism, stop and search policies, and gang culture. However Nelson deals with these with a light touch and without any moralising or preaching, focusing instead on their impact on the psyche of black men and women. At one point in the novel I felt that this tale of what it is like to be a young black man in a city like London, in a society where you are seen as a minority, was in fact the real story Nelson wanted to tell, and the love story was just an excuse to tell it. However, he convincingly entwines the two threads at the end of the book.

Overall, a beautifully-wrought and emotional debut from a very promising new talent. I look forward to more from this author.

Thanks to Netgalley and @VikingBooksUK for this ARC in exchange for my honest review.