Why Helen Graham is the Best Brontë Heroine


This month was Anne Brontë’s 200th birthday, so I couldn’t let it go without writing a post in honour of it.

I don't think I'm alone in thinking that Anne was the boldest of her sisters. Her novel The Tenant of Wildfell Hall certainly is the bravest in rebelling against social expectations of women, and Helen Graham is by far my favourite heroine. Here’s why:
1.  She’s an adult, independent woman who has lived a full(er) life in society.
Rather than living in the margins of society, in a state of arrested development, like Jane, Lucy, Agnes or even Cathy who never wanted to leave the moors, Helen’s previous life means she seems more like a well-rounded person. This might have made her story all the more shocking to Victorian audiences, as Helen’s social standing combined with her radical ideas would have been more likely to influence other people than those of a governess. She can’t be dismissed as just a naïve or unreliable narrator. I think this makes her character a very powerful vehicle to express social critiques of expectations and double standards for women and men. And unlike Anne’s other heroine, Agnes Grey, who shows no progression as a character, Helen learns from her experiences.
2. She’s a good mother who is breaking the cycle of toxic masculinity, long before that was a “thing”.
She won’t bring her son up to be ashamed of loving and respecting women, especially his mother. She dismisses false notions of masculinity and the “boys will be boys” attitude, calling out the double standard there is in how people educated and raised boys and girls. Boys were expected to be exposed to the temptations of the world, in the expectation that this would strengthen their character. In contrast, girls were to be shielded and sheltered from anything that might taint their innocence. Helen argues that children are children and should all be protected from harmful influences until they are old enough to be able to differentiate for themselves
3. She has a higher standard for romantic relationships.
She doesn’t think she is obliged to stay with an abusive husband or to take any rubbish from a man. At a time when women were expected to suffer in silence and submit to their spouses, Helen is brave enough to put her self-respect and her desire to protect her child, above any considerations of what society will say. She shuts her bedroom door on him and takes her child away from him – both significant actions in Victorian England where a wife had virtually no rights independently from the wishes of her husband. Cathy and Jane on the other hand, seem to have this almost masochistic desire to be with men who belittle them and show them cruelty.

4. She doesn't NEED a husband.
She’s financially independent so doesn’t need a man to support her, and because she’s been married before, she is more savvy about what she does and does not want in a partner; this makes Gilbert Markham raise his game. She therefore has agency in their relationship - WITHOUT needing to compensate for the power dynamic by being having him maimed or killed (See Mr Rochester and Monsieur Paul).
5. She’s the only Brontë heroine who makes a living from her art.
At a time when this was considered unladylike or bohemian, Helen makes money to support herself and her son through her work as a painter. Jane Eyre, Lucy Snow, and even Agnes Grey, although unconventional heroines in many ways, have conventional occupations for ladies of their social situation as governesses, companions and teachers. Emily’s Cathy is not artistic or creative in any way, and Shirley does not need to support herself, having inherited wealth. I feel that Helen’s reliance on her creative talents to provide an income while raising her son, reflects the Brontë sisters’ need to earn extra money without needing to leave Haworth, as they were also carers for the Rev. Patrick Brontë and Branwell. At the same time Helen talks about how much she enjoys her work, and is always looking for an honest critic so that she can improve – which makes me think she’s not just doing it for the money. 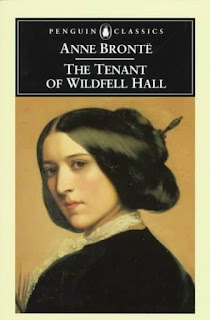