I remember one time when my daughter, aged 10, came home from school, shocked that some countries still have the death penalty.

‘You mean they actually execute people?’ She asked.

I was reminded of that conversation recently while reading Nadifa Mohamed’s The Fortune Men, alongside listening to Danielle Fahiya’s excellent BBC podcast Mattan: Injustice of a Hanged Man. 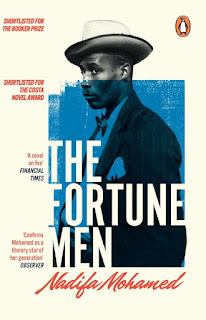 Both the novel and the podcast tell of the wrongful conviction and hanging of Mahmood Mattan, a Somali Muslim seaman living in Cardiff’s Tiger Bay, in 1952. Mattan was accused of having brutally murdered a local shopkeeper, Lily Volpert (her name is changed in the book to Violet Volacki). Mattan maintained his innocence right to the end, but his appeals were unsuccessful, and he was hanged in Cardiff prison on 3rd September 1952. His body was interred in the prison grounds. He left behind a wife and three sons.  In 1998 Mattan’s case was re-examined by the Court of Appeal, and it was found that there had been failings in the investigation, and evidence which had not been put before the jury. Mahmood Mattan was the last man to be hanged in Cardiff, but he was exonerated, making this ‘the first miscarriage of justice to ever be rectified by a British court.’ In the same year, the Human Rights Act banned the death penalty under UK law in all circumstances.

Fahiya’s podcast uses interviews with Mattan’ wife, Laura, and his children and grandchildren, to retell the story of his case and the effect his conviction and execution had on his family. We also hear from the niece of Lily Volpert, who was a child at the time, and how the murder of her aunt affected her and her mother. It is a heartbreaking story of an innocent man hanged for a crime he did not commit, and the most extraordinary and touching part about it, for me, was hearing the words of the letter Mahmood wrote just before his execution. There is an eloquence of feeling, despite the flawed grammar. His words are resigned, bitterly accepting of his fate, but still clearly maintaining his innocence. He is obviously aware of the role race has played in the way he has been perceived, and he makes pointed remarks about the priorities and prejudices of the justice system that resulted in his fate. The voice of his widow, Laura, who never remarried, conveys the painful struggles she and her children lived through, under the unjustified stigma of Mattan’s execution, and the trauma of living with the knowledge of how her husband ‘went to his death with dignity and control.’ It is well-researched, sensitively conducted, and made all the more striking due to the personal connection Fahiya has with the Mattan family.

Mohamed’s novel is a fictionalised retelling of the story. It contains all of the pain, uncertainty and shock of realisation of the facts I heard in the podcast, expressing them in beautiful, poignant prose. Mohamed switches between the perspectives of Mattan himself, and the family of the victim, Violet, deftly balancing the grief of the Volacki family and the fears and frustrations of the Mattans. Bute Street and Tiger Bay come to life as settings where a mix of ethnicities and faiths - often those who were socially and culturally marginalised - lived and worked side-by-side. The Volackis’ personal history, and the horrors their family lived through as Jews, is also carefully teased out by Mohamed. In Mahmood, she paints a portrait of an adventurous, sensitive, proud but loving man. Someone who was unafraid of taking risks and, although he flouted the law every now and then, was certainly not capable of murder.

The passages in the novel where Mahmood talks about his mother, and his memories of Somalia, are visually evocative and bittersweet; the sadness at not being able to remember certain details and feeling so far away from his culture. And really, doesn’t every person descended from someone who migrated to Britain in the 50s and 60s, carry someone similar in their blood? Restless young adventurers, who left their homes and families in search of a better life; who weren't afraid of making the sacrifice to leave everything they knew behind, to get on a ship and come to another country where they didn’t know the language or the customs or the food; where they were looked at as outsiders and treated with mistrust and suspicion. Only for most of our forebears, it did not end the way it did for Mahmood Mattan.

Despite knowing how this story ends, I couldn’t help hoping against hope along with Mahmood. When he realises no help is coming and it is the end for him, what follows is tragic, harrowing, inexorable. My daughter’s instincts, aged 11, were right: it is the height of cruelty to put a human being through this, and must surely take its toll on the humanity of every person involved. And Mahmood knew this too. Perhaps this was why he wrote, in his last letter, ‘If you find the killer after I get hanged, I don’t want him to get hanged at all. It can’t be two lives for one.’

March 08, 2020
Sultana’s Dream is a science fiction short story by the Bengali writer and activist Rokeya Sakhawat Hossain , which was first published in the Indian Ladies’ Magazine, Madras, in 1905.  It imagines the journey of a woman – Sultana - to a fantastical place called Ladyland, “free from sin and harm, where Virtue reigns supreme”. Here, the powers and spheres of men and women are reversed so that women are active in public life, and men are restricted to domestic duties.  The result is a utopia where there is no crime, violence or corruption. Their main diet is fruit; they use technology to carry out manual labour and grow crops, and flying cars to travel. Work is carried out more efficiently as women do not waste time smoking and talking, and they come up with innovative, non-violent ways of defending themselves against enemies. At a time when India was under British colonial rule and women’s emancipation had not yet become a reality even in Britain, Hossain satirised the patri
Post a Comment
Read more