Sultana’s Dream is a science fiction short story by the Bengali writer and activist Rokeya Sakhawat Hossain, which was first published in the Indian Ladies’ Magazine, Madras, in 1905.

It imagines the journey of a woman – Sultana - to a fantastical place called Ladyland, “free from sin and harm, where Virtue reigns supreme”. Here, the powers and spheres of men and women are reversed so that women are active in public life, and men are restricted to domestic duties. 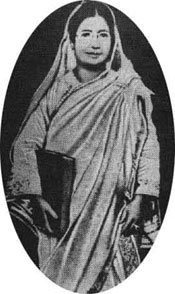 The result is a utopia where there is no crime, violence or corruption. Their main diet is fruit; they use technology to carry out manual labour and grow crops, and flying cars to travel. Work is carried out more efficiently as women do not waste time smoking and talking, and they come up with innovative, non-violent ways of defending themselves against enemies.

At a time when India was under British colonial rule and women’s emancipation had not yet become a reality even in Britain, Hossain satirised the patriarchal attitudes that prevented women from fulfilling their potential and kept them instead in the zenana, or women’s quarters. In Ladyland, there are no zenanas, but “mardanas” – men’s quarters.

She also hinted that it was women’s internalisation of patriarchy that helped to maintain the status quo, and that they would need to change things for themselves.

“A lion is stronger than a man, but it does not enable him to dominate the human race. You have neglected the duty you owe to yourselves and you have lost your natural rights by shutting your eyes to your own interests.”
I found it interesting that a lot of the values and customs which are idealised in the story are also relevant to the 21st century: pacifism, veganism, treatment of asylum seekers, women’s access to education, and scientific and technological innovation. There is even mention of using renewable energy - solar power instead of burning fossil fuels. It shares similarities with Charlotte Perkins Gilman’s Herland, published ten years later in 1915, which made me wonder if Gilman was familiar with Hossain’s story and drew inspiration from it. You can read my post about Herland here.
The story ends with the narrator waking up from what was, in the end, just a dream. However Rokeya Sakhawat Hossain was bent on making the dream a reality - at least in the ways that mattered most. Known in Bangladesh as Begum Rokeya, she was a writer, activist and social reformer who campaigned for women’s liberation through education and employment, and established the first school for Bengali Muslim girls in Kolkata. She remained active in pressing for women's advancement until her death in 1932.
Read the full text of the story here.