Today - 23rd April - is St George's Day. Most of us are aware of St George's Mediterranean and Middle Eastern origins; Google says he was born to Greek parents but in fact his mother was from Syria and his father from what is now Anatolia, right in the middle of modern-day Turkey. Not much else is known about him other than that he was a soldier in the Roman army who was martyred for being Christian.  He is also venerated in the traditions of different cultures and faiths, including in some Middle Eastern and Mediterranean countries. 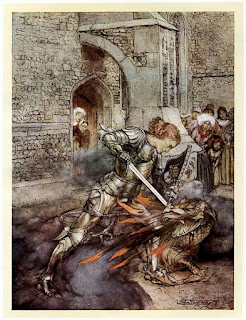 The idea of patron saints is an interesting one to me - I've always thought that the fact that these saints hail from different parts of the world to the countries they are patron saints of, is a bit of a paradox. On the one hand their cultural and ethnic differences are overlooked in favour of the unifying aspect of their faith and values - but on the other hand, patron saints are a symbol of nationhood - and often co-opted by nationalists. A St George's flag in someone's Twitter profile is frequently seen as a shorthand for a certain type of politics, and indeed many of the tweets today are invoking St George's Day in a kind of (self-perceived) defiant English patriotism - a response to the supposedly 'woke' England-hating multicultural 'reverse-racists'. But it's worth  remembering that taking St George as a symbol of English superiority is by no means a new thing.

I have been reading a collection of fairy-tales by Flora Annie Steel, a late Victorian children's author who spent twenty-two years in India as the wife of a civil servant. She published various collections of stories, including both Indian and English fairy tales. In one of her collections, named 'English Fairy Tales,' she gathers together well-known and more obscure folk tales, from The Three Bears and Little Red Riding Hood to Catskin and Cap O'Rushes. But the really interesting thing about this collection is that it is headed by the story of St George, called "St George of Merrie England." 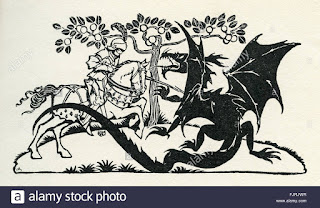 It's a highly embellished version of the legend - the only 'original' part of it is the slaying of the beast. The archaic spelling of "Merrie", and the language of the story, call to mind a romantic, 'olde worlde' vision of England. And when we look at the content of the tale itself, it's clear that there was an imperialist mission at work here. Firstly, in the story St George is not descended from Middle Eastern parents, but is the son of the "Earl of Coventry, who long long years ago was Lord High Steward of England." He has "amber-coloured hair" and is one of the seven "champions of Christendom". He sets off on an adventure to Egypt where he rescues a beautiful princess from being devoured by a monster. As a reward, he wins the hand of the Egyptian princess, who converts to Christianity. But before they can be together, he has to defeat "Almidor, the black King of Morocco", who has been wooing the princess for years, and whose blackness is linked to his cowardly underhandedness - in contrast to the brave English knight.

As St George travels further on his journey, he encounters a "mighty giant, a follower of Mahomed, who hath sworn to destroy all Christians." But this "Christian Knight" defeats the giant. The rest of the story is more of the same: the rest of the Christian saintly knights - from France, Italy, Spain, Wales, Scotland and Ireland - defend Christendom against heathen armies, and take over the administration of "Paynim" (non-Christian) lands. You can't get a more obvious endorsement of European, Christian supremacy and the British Empire; and this was put into the hands of children.

It feels to me like today's devotees (for want of a better word) of St George are trying to resurrect that sense of British superiority and white dominance, but what Steel's story does not show is the context in which she wrote it. From the Indian Mutiny in 1857, to the Afghan wars of the 1880s, British rule in India was far from unchallenged, and it was certainly not comparable to the romanticized deeds of knights of old.

Steel's book was published in 1898, at a time when Indian politics and independence movements were becoming more organised. Indian National Congress was formed in 1885, and the early 1900s would see more strident activism for independence. British ascendancy in the world was further under threat from increasing German imperialism in the years before WW1 - a war which saw 1.5 million Indians serve as soldiers and labourers. This led to British authorities being compelled to take notice of Indian public opinion regarding Home Rule. Then there were various examples of nationalist activism in the years leading up to 1947, like the gathering at Jallianwala Bagh in 1919 - which ended in a massacre of unarmed men and women; or the failed Chittagong uprising of 1930.

And in that refusal to be controlled by imperial masters, perhaps those children of the Empire had more in common with the St George of legend, than the xenophobic ethnonationalists of today who lay claim to him. Because against this backdrop of anxiety about threats to British rule in India - the jewel in the imperial crown -  it seems like not only has the legend of St George been turned into a fairy tale, but the very idea of a time when white, Christian, British rule over the Empire was simply the accepted order of things, is little more than a myth.

You can read the full story here.