Sisters Are Doing It For Themselves: “Herland”, Charlotte Perkins Gilman

December 06, 2019
This week I watched Liz Bonnin’s hard-hitting BBC documentary Meat: A Threat To Our Planet? –  which exposed the impact of the meat industry on the planet, in all its grubby greed and bleakness. It felt like the backstory to some dystopian reality, but it’s only in recent years that this issue has begun to be picked up and amplified on mainstream media with some urgency, so I was surprised to find that people had been thinking about the logical consequences of industrial meat farming over a hundred years ago.

Charlotte Perkins Gilman’s utopian novel Herland, is on the surface a feminist novel: published in 1915, it imagines an all-female society in a hidden land where men were wiped out by a natural disaster 2000 years previously. However it also seems to be, in part at least, a response to global ethical, social and environmental issues that are still very current today, such as overpopulation, competition for resources, animal cruelty – as well as gender inequality. 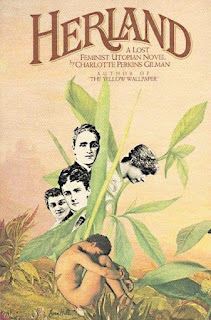 The book follows three American men who join an expedition and find this secret land. Through their interactions with the locals, they find out that the women have evolved to reproduce by parthogenesis. When their population began to grow too numerous for the land and resources they had, they controlled birthrates. They also stopped rearing cattle and livestock, as “We needed the land for ourselves”. It seems to be the kind of drastic action that some think we ought to be taking right now. They live what we might call a vegan lifestyle, thinking of animal welfare and eating only plant-based foods. When asked what they do for milk, their response is

MILK? We have milk in abundance – our own.

The men are predictably grossed out by this, which made me chuckle. In Herland we find the original proponents of cruelty-free fashion, as they don’t use feathers to adorn their hats. There’s even a criticism of the way in which people in the outside world keep pets - in particular, dogs. The male protagonists have no logical answer to the women’s very logical questions, not just on animal welfare but on poverty and social justice, highlighting the absurdity of some of their patriarchal and capitalist values.

Gilman’s attitude seems to be, if only women were left to run the world, they’d manage so much better. It’s not just about how Herland treats animals. They manage their natural resources efficiently – mainly through a system of communal living and responsibility which would be total anathema to American individualism and capitalism; they promote a high standard of intellectual, scientific inquiry; and they live a physically active and healthy lifestyle, free from the objectifying male gaze. They are strong and rational as well as being nurturing and compassionate, which sends some of our males into a bit of a tailspin because how could women possibly have managed to come up with working solutions to complex problems on their own? 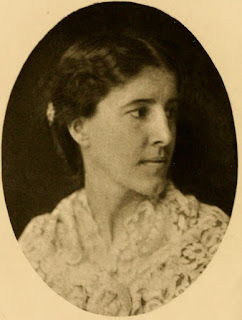 Gilman represents that male gaze of men of her time, and their different modes of thinking about women, through the male protagonists. Jeff believes in chivalry and romance, thinking that women should be elevated and protected – much to the annoyance of his girl Celis, who doesn’t need protecting thank you very much; but he’s also the most enthusiastic about the Herland way of life. Van, the narrator, sees them more dispassionately, at first as scientific subjects rather than people in their own right, but becoming more balanced later on in his relationship with Ellador. And then there’s Terry. Ah, Terry. Who among us, has not known a Terry in our lifetime? Terry is so recognisable as THAT guy in a group – the “lad” who has always had misogynistic views, but has never been challenged by his mates because he’s a “top bloke”:

Even where his habits were known, there was no discrimination against him; in some cases his reputation for what was felicitously termed “gaiety” seemed a special charm.

Terry’s sense of male entitlement takes him to such lengths that at one point he attempts marital rape (an unknown concept in 1915). Luckily he’s no match for Alima, a no-nonsense Herland woman who knows how to defend herself.

Although the ideas seem so ahead of their time in many ways, the book is very clearly a product of its time in others. It has a binary, heteronormative view of gender and sexuality, and there are some obvious racial prejudices, which are jarring to a 21st-century audience. The women are described as possibly being of an “Aryan race” who are “light-skinned” (though slightly tanned by their outdoorsy lifestyle). “Aryan” of course doesn’t have the same associations in 1915 as it will come to have post-1933, but the subtext is that only a white race would be capable of reaching the levels of enlightenment that they have. Secondly, we are told that the women rose up only when their slaves began to rebel. This is telling. We’re not told that the slaves are of a different race to their own, so it might be more to do with class than with race – which raises problems of its own. But Gilman being American, the concept of slavery must have had specific racial connotations to her audience. Thirdly, although Gilman takes a somewhat progressive view of reproduction, suggesting that women should have more agency over whether or not they want to be mothers (or rather, “Conscious Makers of People”),  she sees abortion as unequivocally evil and elevates motherhood as the pinnacle of what it means to be female – an attitude many 21st century readers would object to.

One word that recurs throughout this book is “sisterhood”, and that’s what the women of Herland are most protective of. But despite all of their strength and interdependence, they are eager to learn more about the world outside, and are considering whether they should – or could – go back to being part of a “bisexual” (as they call it) society - ie one with men, so that they can all mutually help and benefit each other. Although Terry is the kind of delightful chap who would have declared them all “man-hating feminazis”, Gilman was not advocating a man-less society. If she were alive today I imagine she’d talk about “male allies” and get right behind Emma Watson’s #HeForShe campaign. In the end, Van and Ellador exemplify that perfect, equal partnership. Sisters might have been doing it for themselves in Herland for 2000 years, but as the Eurythmics and Aretha Franklin tell us: