For Evil to Triumph, all it Takes is for Women to Say Nothing: Vox, by Christina Dalcher

November 06, 2019
VOX imagines a terrifying dystopian society where women are only allowed to utter 100 words a day. They are forced to wear a metal cuff that counts the number of words they say and for every word spoken over the 100 word limit, the device delivers an electric shock of increasing strength. Men have no such restrictions. The premise of the book sounded interesting, and I liked the look of the cover (I know, I know, don’t judge a book etc, but we all do it) but it wasn’t quite what I was expecting, and I suspect that that is the reason I found it disappointing in many ways. 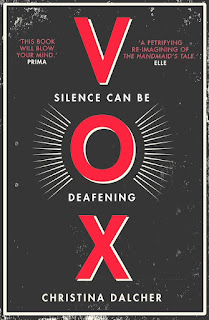 The protagonist is Jean, short for Giovanna, a former neurolinguistics professor and researcher (like Dalcher herself) who, when the book opens, is inwardly raging at her own lack of power to stand up for herself and her small daughter, Sonia. She resents the complicity of the men in her life – her husband Patrick and teenage son Steven – in upholding the new order. However, Jean’s professional background then attracts the notice of the government and she finds herself working on a project for them, with untold consequences.

Having read “VOX” just after finishing “The Testaments” and the latest series of the TV adaptation of “The Handmaid’s Tale”, it’s clear that Dalcher took lots of inspiration from Atwood’s Gilead, both the version in the book and the one adapted for TV; a fact acknowledged by Dalcher herself. However the extent of the parallels between the books make it seem closer to fan fiction than an original concept.  Dalcher’s American setting is also run by a “religious” fundamentalist government, and women in this world are also not allowed to work, have their own bank accounts, or read and write. Even the main character’s name, Jean, is just a phoneme away from the Hulu series’ June. The book is written mostly as an internal monologue, like Offred’s. The narrator is also unreliable by turns, like Offred; one minute telling us something happened, the next telling us that it didn’t actually happen that way. Both Jean and June are also motivated to join the resistance out of a desire to protect the daughters they already have, and the unborn children they end up carrying. Jean even has a bolshy best friend, just like Offred: Jackie Juarez has Moira’s direct, irreverent way of speaking, and takes the initially politically apathetic Jean to task for accepting the gradual erosion of their civil liberties. This, I suppose, is one of the main messages of the book – that we must use our voices in whichever way we can, or risk losing them completely. This is clear enough on its own, but in case we didn’t get the point, Dalcher hammers the point home using the oft-quoted

“for evil to triumph, all it takes is for good men to do nothing”.

The book definitely delivers shocks (see what I did there?) in abundance. In some ways it is even more chilling than The Handmaid’s Tale, as in this world even little girls – toddlers – are fitted with the metal word-counter. Children are co-opted as agents of the state to monitor their parents, and we then find out that the government has plans to go to almost ridiculously extreme lengths to control the population. Ordinary people are slowly inured without realising it, to colluding in the oppression of others. As Offred says in “The Handmaid’s Tale”,

“Nothing changes instantaneously: in a gradually heating bathtub you'd be boiled to death before you knew it.”

However, in this particular world we are only twelve months post-revolution, so there are some obvious teething problems. The technology can be compromised, for a start. Secondly, girls are taught mathematics in school, because

“you need math [to run a household], but not spelling. Not literature. Not a voice.”

This is a disappointingly reductive view of maths. Any mathmo worth their salt will tell you that mathematics is a beautiful language all on its own – a system of symbols from which meaning can be derived. Presumably they need to learn times tables in order to be able manage a household budget properly, but how do they teach even basic arithmetic without reading, writing and speaking, at least a little bit? There are other problems but I’ll stick with these two points for now.

I also found the political underpinnings of this society to be a little shaky. In this world, the “Pure” movement isn’t motivated by anything more than an alt-right-esque nostalgia for traditional gender roles.  Although family planning and birth control aren’t permitted, there is no driving reason for it, unlike the fertility crisis and falling birth rates in Gilead. As a result, there is no option to explore the idea that the regime is trying – however misguidedly – to solve a very real problem. True fanatics sincerely believe they are working for the greater good, which is what makes Atwood’s Serena Joy and Aunt Lydia so interesting. In Dalcher’s world, however, the government is cartoonishly portrayed as unsophisticated, bordering on unhinged, power-hungry misogynists who just want women to shut up forever.

Many of the characters are two-dimensional, which seems like a lost chance to explore how patriarchy harms men as well as women.  Patrick is portrayed as a pathetic, spineless coward; Steven is greedy and obnoxious (though Jean and Patrick only have themselves to blame with that one); Morgan is caricatured as an insecure little man whose small stature and high-pitched voice are referred to over and over again; and Lorenzo is a walking cliché – tall, dark and handsome, brainy and fearlessly supportive to boot. Incidentally, I didn’t like the romance between Jean and Lorenzo; even though Patrick was so irritatingly bland, I felt no sympathy for Jean’s infidelity, perhaps because she is just so unlikeable as a character. I even ended up feeling slightly sorry for him, which is more than can be said for the supremely self-absorbed Jean.

That said, “VOX” certainly kept me turning the pages, as I wanted to find out what would happen next, and I wanted to see some form of poetic justice for all of the INjustices seen throughout the novel, especially as Dalcher invests so much time trying to stoke our indignation. The linguistic jargon could have done with a little more editing, but I understand the intent behind it. There are more POC characters than in “The Handmaid’s Tale”, although they are all middle-class and university educated; it would be interesting to see more about what happens at the intersections of race, gender and class. And at one point she does show some self-awareness of what she’s doing with the genre, when we’re told “there’s always a resistance”. That part made me laugh, and I wished I could have seen more about the workings of the resistance, and the people involved in it.

All in all “VOX” was an entertaining read which was both shocking and infuriating when it described the different ways of curtailing women’s freedoms. However it was also at times frustrating, as I felt it had so much more potential than it ultimately delivered.