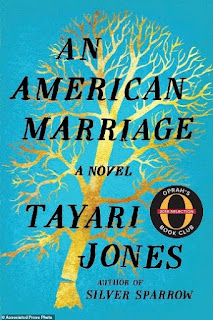 “An American Marriage” examines what it means to be black in America today, by studying the effects of incarceration on the psyche of black Americans, and the impact this has on some rather complicated relationships. It’s a love story, but not in the traditional way, as it’s not the Happy Ever After that takes centre-stage, but the disintegration of a marriage.

Roy and Celestial are seemingly the perfect couple by general Hollywood standards: young, attractive, smart, and ambitious. They are university-educated, and Celestial at least, comes from an affluent family. They start off seeming to be very much in love, although not without their moments of conflict. There is tenderness between them as well as passion, and they support each other in their ambitions. Until one day, one argument, and one chance encounter, causes everything to come apart.

The catalyst for the unravelling of Roy’s life in the book, is that age-old thing: a black man falsely accused of rape. Only this time it’s a little further away from “To Kill A Mockingbird” territory, as the victim was indeed raped, but Jones doesn’t specify whether she was white. It is, however, implied, as we’re told that Roy was “a black man in the wrong place at the wrong time". The crime itself takes place off-stage; there are no details about it, because it’s not the crime but the consequences that are central to the book.

We know that Roy is innocent, but he is – figuratively - lynched by the system; his wrongful conviction means he loses almost all sense of self and security that he has worked so hard to build. It’s a common enough story, but Jones tells it in a unique way, examining the effects on all parties involved, from the different points of view of Roy, Celestial, and their friend Andre. There is nobody to blame apart from the absent perpetrator, and allowances are even made for the victim’s mistaken testimony. And so we don’t ever get the satisfaction of justice being done. Instead, we’re watching the characters learn how to reconcile themselves to the bitterness and pain, and learning how to move on.

For Roy, who was raised with the old-fashioned values that a husband “sits his woman down”, or provides for his wife, prison is an emasculating experience. Suddenly the tables are turned and he has to rely on Celestial’s financial and emotional support. It’s a bitter pill to swallow, and he talks of needing to feel “like a man” once more. However, the experience also makes a martyr of him in the eyes of his community, and with it comes the expectation that Celestial martyr her own feelings in turn, for Roy’s happiness. When she rebels against this, she’s ostracised by their families. As Celestial’s friend Andre points out: “In a way, the whole black race was loyal to Roy, a man just down from the cross.” In other words, Celestial’s needs and feelings must come second to this greater, more primal injustice, and Jones allows us to watch, judge and re-evaluate our judgement of her as she wrestles with her conflicting feelings of love and duty.

Racism is a negative force in the book, but I wouldn’t call it a book “about” racism: there is no outright hostility or tensions with white authorities; there are no named, white characters, and any encounters with state institutions are impersonal. It’s about the pressures exerted by race and class on personal relationships. It’s about being a black American at the mercy of a prejudiced justice system. It’s about social mobility, which is more elusive than it’s often made out to be (to what extent does The American Dream really exist for everybody?). It’s also about gender, and the often unfair expectations that men have of themselves, and of the women in their lives.

And that’s before we even get to the rawness of the emotions: you can feel Big Roy’s love for Olive, Roy Jr’s helpless rage, Celestial’s sadness, and Andre’s determination, pulsing off the page. This is wholly due to Jones’ language, which is visceral and lyrical by turns, giving us little gems like Andre describing his feelings for Celestial:

My affection for her is etched onto my body like the Milky Way birthmark scoring my shoulder blades.

Or Celestial’s description of her marriage to Roy:


…our marriage was a fine-spun tapestry, fragile but fixable. We tore it often and mended it, always with a silken thread, lovely but sure to give way.

I’m a sucker for characters I can care about, and these ones are warm, serious and authentic. Roy is a loveable rogue, and Andre has emotional integrity, whatever else we might think of his actions. Although I thought that Celestial wasn’t as open or as “real” as Roy or Andre seem, Jones paints her very sensitively: I appreciated the fact that she tried to do the right thing by Roy as far as she could, and that she resisted the roles that other people tried to force her into, in order to live on her own terms. Yet I found some of her thought processes a little more opaque: why could she not have made a clean break with Roy? Was it cowardice, pity, or some lingering affection for him?

That little quibble aside, what made this book for me were the fundamentally good but flawed characters, who are convincingly, recognisably human, dealing with the worst that life can throw at them in the way that flawed human beings do: by making a bucketload of mistakes, but learning and growing from that, and eventually, finding their own happiness.

Please join the discussion at The Brown Brontë's Book Club where we'll be digging into how relevant the themes discussed in this book are today.