November 13, 2019
I missed the boat with Girl In Translation, but I was thrilled to be able to get my hands on a copy of Jean Kwok’s latest novel. 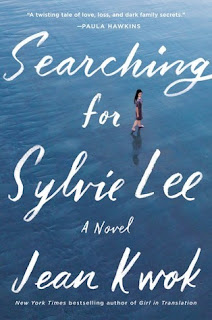 “Searching for Sylvie Lee” is a tale of many things: an immigrant Chinese family trying to make a life in the United States; the sibling relationship between two sisters; family rivalries & loyalties; grief and loss; and a missing person mystery, all rolled into one. The search for Sylvie is only a part of what it is all about, as all of the characters seem to be searching for something precious. Searching for love, searching for acceptance, searching for a place to belong, even searching for the family jewels. It is also about the pain of separation from the people and places we love, with most of the characters living in some sort of exile, whether it’s Ma and Pa living away from China, or Sylvie’s double exile, first from her parents, and then from Lukas and the Netherlands. But above all, it is a book about searching for that one person who sees us as we are, who speaks our inner language.

Amy and Sylvie are sisters who share a close bond, despite their differences, and both have hidden depths. Sylvie is beautiful, clever, and intense. Amy is less sure of herself, used to living in Sylvie’s shadow, but more artistic and emotionally open. The book opens with Amy reminiscing about Sylvie; we learn about the recent death of their grandmother, and the sisters’ upbringing in New York. Ma and Pa Lee emigrated from China to the United States, toiling to make a living and to raise their daughters. In the beginning, it was so hard that Ma makes the painful decision to take baby Sylvie to the Netherlands, to be raised by Ma’s cousin Helena and her own mother – Sylvie’s Grandma.

When Sylvie is nine years old, she is brought back to the US where she helps take care of the two-year-old Amy while their parents are working. But that initial separation of Sylvie from her mother, and later from her family in the Netherlands when she returns to the US, leaves deeper scars than anyone can guess. When Sylvie hears that her beloved Grandma is terminally ill, she flies back to the Netherlands to be with her, but after the funeral Sylvie goes missing. Amy flies to the Netherlands to try and find her, and discovers a myriad of secrets about their family members’ lives and relationships.

The book is narrated from the perspectives of Amy, Sylvie and Ma, interspersed with emails and newspaper reports that fill in gaps or foreshadow events. Complicated relationships are compellingly portrayed, such as Helena’s ambivalence towards Sylvie, the closeness between Lukas and Sylvie, and the distance between Ma and Pa. Kwok also manages to build up a tantalising sense of mystery in the first half of the book, but the use of newspaper articles to deliver crucial pieces of information means that when the truth is revealed, it’s like an almost literal dash of cold water. In fact, water is a recurring motif throughout the novel (not just on the cover!), and once you start looking for it you’ll see it popping up everywhere, starting with a weird little prophecy about Sylvie and extending to the fishing metaphor oft-repeated by Ma:

Heaven’s net is wide, and none can escape its mesh.

I enjoyed reading about Dutch cultural customs, and could absolutely identify with the feeling of trying to maintain cultural traditions when living in a diaspora community:

It’s hard to celebrate with all your heart when your festivity isn’t reflected by the society around you.

As a language nerd, I loved Kwok’s skilful rendering of Chinese and Dutch into English, to differentiate between the narrative voices of Sylvie, Amy and Ma. She explores the idea of being truly ourselves, truly at ease, only in the language we grew up speaking and hearing:

No matter how many years I lived in America, I always dreamed in Dutch. Dutch was something that belonged to me, or so it seemed when I left the only country I had ever known.

By changing sentence structures and directly translating proverbs, she expresses the flavour and character of the different languages, so that Chinese is ornate and full of metaphors (I think everyone should start calling their loved ones “my heart-stem”), while Dutch seems more convoluted with its “wrapped-up word order”.

I did think that the book dealt a little abruptly with some big revelations, such as Filip’s story, and I would have liked to have seen more of the relationship between Helena, Sylvie and Grandma. However for me, the best things about this novel were the layers of imagery, the poignant and sensitive musings on grief and loss, and the contradictions in the closest relationships. This quote summed it up best for me:

An ocean of love, guilt, and duty surged back and forth between them, stroking their hearts even as it kept them apart.

Searching for Sylvie Lee is available now on Kindle, and will be released in hardcover and paperback in the UK by John Murray Press in July 2020.