12 Books by BAME Authors for Kids and Teens

An oldie but a goodie: I remember picking this up in my primary school library and being charmed by the adventures of these two best friends from different cultures. Kamla’s family is from India, and Kate is English. But really, they are just two little girls exploring their world and learning about it. Jamila Gavin sensitively portrays the feelings of alienation in a strange country, when you don’t know anyone or speak the language very well. And the friendship between the two girls is a beautiful thing. Suitable for newly independent readers.

When 6 year old Elizabeth arrives in England from the West Indies she finds the place so strange and unfamiliar that she is delighted to recognise Mr Hot Pepper, Miss Lemon and the Onion Family hanging out in the cupboard. With their (sometimes misguided) help, she comes to adjust to her new life in England. It’s touching and quirkily funny, perfect for reading aloud to younger readers. I love that it's partly written in patois, decades before Rastamouse popularized it in children’s media. It also gives a glimpse of the practical hardships often faced by single parents and immigrant families.

When a new boy arrives in class, everyone is curious to know more about him. Ahmet is a refugee from Syria, where there is a war. He doesn’t speak much English, and seems shy. Not everyone is friendly, but the narrator and their friends welcome him and make him a part of their group. His new friends hatch a plan to help Ahmet’s parents join him, but will they succeed? Onjali Rauf presents complex subjects such as war, refugees and xenophobia, in a way that is simple enough even for younger readers or listeners to understand. The language is simple but engaging, it is well-paced and the main characters are likeable. My son powered through it in a few days. It would appeal to fans of Jacqueline Wilson, as well as younger or developing readers.

4. Little Badman and the Invasion of the Killer Aunties – Humza Arshad and Henry White, Puffin (2019)

Humza Khan aka Little Badman is the greatest eleven-year-old rapper that the world has ever known. One day everyone will know his name. But right now something strange is happening at school: all the teachers are disappearing and the children’s aunties are taking over. It was all right as long as the aunties were feeding them tasty snacks, but now they’re trying to interfere with Humza’s music. So Humza and his friends Wendy and Umer go on a mission to find out the truth, and save the world. This entertaining story delivers plenty of laughs - perfect for reluctant readers.

This is the second book in the Planet Omar series and lives up to the first one in every way. Omar and his best friends Charlie and Daniel are saving up to buy themselves a Laser Nerf Blaster so they can have an Epic Nerf Battle. But then Omar hears that his mosque is in trouble and the friends decide to use their money – and to earn more - to help save it. But when the money goes missing, they have to work out who has it, and they have to do it in time to stop the mosque from closing down. Mian’s lively writing style and Mafaridik’s unique illustrations are a winning combination. This will appeal to fans of Tom Gates and Diary of a Wimpy Kid.

Taylor’s coming-of-age story is set in 1930s Mississippi, a place and an era where Jim Crow laws create inequality and fear in the lives of black people. It’s a great one to introduce older readers to the history of racial persecution and inequality in America. I’ve spoken about this book before, in my post Seven Stories For Black History Month – go and check it out for more!

Comfort leaves England after the death of her white British mother, to go and live with her Ghanaian father. As Comfort explores her Ghanaian heritage she comes to know her father’s village, her extended family, the language and customs. But is this really where she belongs? The descriptions of village life are vivid and have stuck with me decades later, and Comfort’s sense of conflict as she tries to reconcile both the Ghanaian and British parts of her identity is sensitively and authentically portrayed. This might resonate with readers of dual heritage.

In a world where white people (noughts) are treated as inferior by black people (Crosses), Callum and Sephy are in love. But Sephy is a Cross and Callum is a nought, and neither their families nor wider society will accept their relationship. But when a nought resistance movement starts to gather momentum, it threatens to tear everything apart.  Malorie Blackman explores issues of race, class, politics and family loyalty in this book, the first of the Noughts and Crosses series. It has also now been adapted for a television series, airing on BBC1 this month.

Samkad is a young Filipino boy who is about to come of age. But before he can complete his rites of passage properly a strange visitor arrives in the village; he has white skin and can speak different languages. He tells Samkad about people called “Americans” – and then American soldiers arrive in the village. Gourlay intertwines a coming-of-age story with a critique of American colonialism, while telling the story of cultures and peoples who are rarely portrayed in books written for English speakers. It is an evocative, sobering, thought-provoking experience that introduces readers to the impact of colonialism on different cultures and societies.

This adventure story is set in an ecological dystopia where bees have completely died out. It follows brother and sister Themba and Shifa as they are sent with other children to labour on a farm, pollinating crops by hand in order to produce food for the nation. Then Themba is taken ill and Shifa must find a way for them to escape if she is to save him. Only love can lead them home. With relevant messages on the importance of family, hope and protecting the natural world, Sita Brahmachari's book is ideal for the thoughtful young reader in your life. 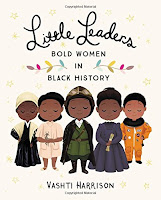 A great crossover title for World Book Day and International Women’s Day, in which Vashti Harrison tells the stories of forty inspirational black women in American history. Ranging from Sojourner Truth to Maya Angelou, Katherine Johnson to Alice Ball, Harrison presents women in many fields and disciplines. And the illustrations are just so cute! Check out the others in the series: Exceptional Men in Black History, and Visionary Women Around The World.

This month saw the passing of Katherine Johnson, the NASA mathematician whose calculations helped launch the first – and subsequent – manned space flights. And nobody knew her name before Hidden Figures. Leila Rasheed’s biography of Johnson is informative, accessible and engagingly written, and makes an ideal choice for middle grade and older readers. I’ll definitely be giving this as a gift to some aspiring mathematicians I know.