Home Is Where The Heart Is: Hashim and Family


It’s a difficult time right now for debut authors to be releasing books. So as a book blogger I’m trying to do my bit by sharing my thoughts on this wonderful debut novel: Hashim and Family, by Shahnaz Ahsan.


Before we start I have to tell you that I know the author personally, and OBVIOUSLY I’m bursting with pride for her, so if you feel you need to take this review with a grain or two of salt, please do so. However, rest assured that I never recommend a book that I don’t genuinely think is worth reading. 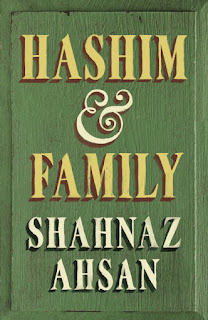 It’s Manchester in 1960 and Hashim has just arrived in Britain from East Pakistan – now known as Bangladesh. He moves into a shared house with his jovial cousin Rofikul and sets about trying to build himself a life. We see the two men going to work, socialising with their friends and navigating life in a new immigrant community. It’s not easy to adjust to a foreign country – the weather, the food, the unfamiliar ways. And people aren’t always friendly. But with Hashim’s new wife Munira, who joins them from East Pakistan, and Rofikul’s Irish girlfriend Helen, they form a close-knit family unit.


Then in 1971, war breaks out between East and West Pakistan and it brings old memories, repressed guilt and forgotten obligations to the surface. How will the four of them cope with the pressures of being pulled in different directions by the different places they call home? And how will those pressures affect the next generation?

First generation Bangladeshi immigrant experiences in Britain, and experiences of the war of independence in 1971 aren’t something that most readers will have come across, especially as the birth of Bangladesh is often swallowed up in the wider narrative of the Partition of India. But the depictions in this book are eye-opening as well as being insightful.


In her beautifully-written debut, Shahnaz Ahsan has successfully evoked what life was like for Bangladeshis in Britain during this period. The sense of community between some, the prejudices of others, the streets and villages of Bangladesh during its war of independence.


But the triumph of this book has to be its characters. They are multi-dimensional, honestly drawn, and so full of life that I felt as if I knew them personally by the end. Munira’s intelligence, Helen’s compassion, Hashim’s devotion to his family, and Rofikul’s independence, were all the things that kept me rooting for them. Even when Ahsan paints her characters’ flaws – and at least one of them (I won’t give it away) does something pretty near unforgivable – I couldn’t bring myself to hate them.


The book is well-researched with the portrayal of Manchester in the 1960s, its casual racism and the difficulties of immigrants adjusting to everyday life, convincingly painted on the page. But Ahsan also takes us to war-torn Bangladesh in a stark and sobering account of the ravages of the conflict of 1971, in which she captures the feelings of fear and tension in the city of Dhaka. It’s an important section for allowing – at least partial – understanding of one of the characters’ actions. It makes for uncomfortable reading at times, and challenges the sense of warmth and security that Ahsan has carefully created for us in the previous chapters. As a result, some readers may find this switch of location jarring with the rest of the narrative, but to me it was a clever way of conveying the sense of being unsettled and thrust into confusion in a country at war – even one that the character in question might have thought of as home.


So where exactly IS home? Is it the building we dwell in day-to-day? Or is it where we’re born? Or where we’ve grown up or spent most of our lives? Or perhaps it’s where we’ve chosen to settle and carve out an existence for ourselves, from the bottom up, building a life brick by metaphorical brick. It’s the main question in Hashim & Family and will have you pondering over it after you’ve finished the last page.


Hashim and Family is by Shahnaz Ahsan. It is John Murray’s lead fiction debut for 2020, and due for release in hardback on 2nd April.