Panic Buying and Lockdowns: Life during the Bangladesh Independence War, 1971


With the announcement of the UK lockdown  in response to the Covid-19 pandemic, many of us are adjusting to a new normal. People keep saying this has caused a disruption unprecedented in peacetime, and are invoking the spirit of previous generations who have lived through world wars.


March 26th marks the 49th anniversary of (what was then) East Pakistan declaring independence from West Pakistan, and the beginning of the violent nine month-long conflict that gave birth to Bangladesh. I thought I’d share some excerpts from a journal written by Jahanara Imam, who was a writer and educator living in Dhaka at the time. Her husband and sons were active participants in the struggle for independence, and were eventually killed.
Some of these might resonate with our own experiences at the moment, while others are a reminder of what other generations have been through in times of conflict and political uncertainty.


NB: These are all my own translations from the original Bangla.

“ ‘Listen, there’s going to be trouble. They have already started demonstrating over here. I heard Baytul Mukarram and the stadium shops are all closing. If it gets worse they could impose a curfew. We’ve got enough food and supplies at home, haven’t we? If not you’d better go out and get some now.’


So then I went out again. When I got onto Elephant Road I saw that the little shops on both sides of the street were heaving with people, all frantically shopping. The shopkeepers couldn’t get through them all. I went to two or three shops, elbowed and shoved my way through the throng and managed to buy some crackers, Bombay mix, matches, candles, milk powder and batteries. When I got home I gave Barek and Subhan an empty kerosene tin and a sack and sent them out to get kerosene and rice.”

“Didn’t sleep a wink last night. The curfew came suddenly upon us at eight...We didn’t hear the announcement, so we didn’t realise that all the chanting was mainly in protest of the curfew; we thought they were just repeating what they had been shouting all day. But then we were startled by the sudden, harsh wail of the siren. We had no idea what was happening. After phoning around various people we learnt that it was the siren signalling the curfew. Around eleven o’clock at night we heard it being announced over a loudspeaker as well. It sounded as if it was coming from the Bolaka New Market road and the road in front of Iqbal Hall, just south of our house. That was when we started hearing even louder chanting. That meant the curfew was being ignored in favour of protests and slogans. I started to feel uneasy; I thought, I’ll telephone around to see what the situation’s like elsewhere.”


Sheikh Mujib has issued an order for all offices to remain open between half-past two and four o’clock, in order to conduct any urgent business and to enable people to earn some money during the days of the strike. The ration-shops are also open at those times. So are the banks; you can draw money out between two-thirty and four, but not more than one-and-a-half thousand taka. It’s funny to think of banks being open in the afternoon. Everything’s been turned upside-down by the Sheikh’s orders.


Hospitals, pharmacies, ambulances, doctors’ vehicles, the press and their vehicles, water, electricity and telephone services, and road-sweepers and refuse trucks are all considered essential services, so they are exempt from the strike.”

“I fell asleep. Suddenly I was woken by a tremendous noise. I started up. Rumi and Jami rushed into the room; what was going on? There were two or three distinctly different sounds; the ‘boom-boom’ of heavy bombs, the stuttering ‘ta-ta-ta’ of machine-guns and another wailing ‘eeee’ sound. Something was lighting up the sky and even the inside of the room. We all hurried up onto the roof. South of our house lie several university buildings - Iqbal Hall, Mohsin Hall and a few other halls. Most of the noise was coming from that direction, mingled with the sound of many voices wailing and shrieking. We couldn’t stay long on the roof. Something like sparks were hurtling towards us with a wailing screech. Rumi suddenly leapt up and took down both the black flags and the new Bangladesh flag.” 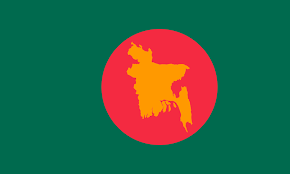 "I picked up the phone in the sitting-room; the line was dead. I went upstairs and heard Baba’s voice. Rumi went and held his hand and started talking to him in a low, soothing voice.  I couldn’t sleep for the rest of the night. I went up onto the roof again. I could see the distant glow of fires. The sound of cannons and machine-gun fire was everywhere; the sky was lit up in different colours by the Traser Howi’s, the sound of screaming carried on the air. North, south, east, west, everywhere columns of fire were becoming more distinct and looking as though they were touching the sky. Nobody said a word...At seven [next morning] I went next-door to Dr. A. K. Khan’s house to use the telephone. Their phone was dead too. Gradually the other people on our street began to peer out. Their faces were terrified; everyone had been up all night. Nobody understood what was happening. All the phones were dead. "

"An indefinite curfew. What with all the death and destruction everywhere, who would dare venture out, even without a curfew? The sound of the cannons has not stopped. It just gets quieter from time to time. We don’t need to go up onto the roof anymore to see the burning columns of fire; we can see a great deal from the second storey windows. Most of the sunny, clear, blue sky has been obscured by black smoke. […]


The telephone’s dead, the radio’s mute, there’s a curfew on, the sound of gunfire is making me restless, and there’s no way of finding out what’s going on out there.”

"There’s only so long you can sit in a room. At one point I went and opened the street door and stepped onto the car-verandah…I didn’t dare step over the verandah into the street. The air was still being rent by the sounds of the shelling. From time to time I could hear dogs howling, mingled with what sounded like human cries. Very faint. Or was I imagining it? Was there anyone even left alive to cry out, after that ceaseless bombardment? What is strange is that there aren’t even any sounds of birds; not even a crow or a kite. Keeping within the boundary wall, I just stretched my head out beyond the gate and looked to the left towards the main road. The road was empty. If I’d watched for long enough I might have seen a jeep or a truck full of soldiers going past. But I had no need to see that.”