Kathryn, an American woman, and Rashid, a Pakistani Muslim man, meet and fall in love in Dubai. They marry and move to the US where they start their family. Then Rashid’s father is killed while at a wedding near the Afghan border, in a US drone attack. Rashid flies back to Pakistan for the funeral, where his mother pressures him to exact revenge for the loss of his father. But doing so would mean attacking the country he now calls home, and in which he has built a life with his wife and sons. How far will he go to fulfil his conflicting obligations, and can he ever be forgiven? 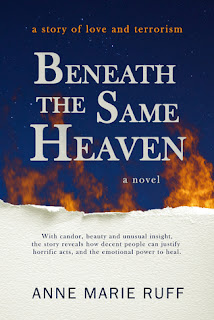 I was interested to see how the author would examine what might motivate someone to carry out a terrorist attack, and I was glad to see that she tried to give a nuanced, human picture, without at all condoning the enormity of those actions. She carefully positions one particular act of terror on American soil within the wider context of the War on Terror, humanising the innocent, collateral victims of drone attacks that are often simply statistics in the news.
The author also draws a comparison between the attitudes underpinning reprisal attacks on both sides, and the part this plays in perpetuating a cycle of violence.  So far so good. But then Rashid is  cast as some sort of tragic hero, with not-so-subtle comparisons to The Lion King, unable to wield agency over his own destiny. While I understood the comparison, I found this a bit of a stretch; there is always a choice in how we react to bad things, no matter how difficult, and I found Rashid's actions to be cowardly and taking the path of least resistance.

Apart from this the characterisation is generally convincing, and Ruff shows the complexities in their emotions, from the loving father to the bereaved son to the abandoned wife.

Ruff writes about Punjabi culture sympathetically, and even affectionately, from Kathryn’s and Rashid’s points of view. However there are some uncomfortable instances of stereotyping of other nationalities and ethnicities by both Kathryn and Rashid. Bengalis are “dark”, South Indian tea porters are “deferential”, British nurses drink too much. There’s even a prostitute whose sole purpose seems to be to bring Rashid back to himself, which I found hugely problematic and disappointingly reminiscent of the "tart with a heart" trope.

I understood that the point of the ethnic and social stereotyping was possibly to show Kathryn and Rashid’s prejudices of white and brown people being challenged. But it didn’t really work, as neither of them were actually Bengali / South Indian / British / menial workers, so none of their existing preconceptions of race and class were actually changed. When they're not looking down on other ethnicities, they go to the other extreme and fetishize each other’s skin colour, showing the legacy of both white colonialism itself and its internalisation by colonised peoples. Kathryn describing Rashid’s skin as “exotically dark”(!) had me rolling my eyes, as did Rashid thinking of his “white American wife” like some sort of trophy.


In many ways, Ruff’s knowledge is detailed, such as when she describes the subtleties of pronunciation between the different Punjabi castes, or in her description of the engineering processes Rashid is familiar with. In others, however, I felt that there were some regrettable holes in her research, especially with regard to language and cultural differences between Indian or Sikh Punjabis and Muslim / Pakistani Punjabis. In one place she refers to the call to prayer as “namaz”, which is incorrect – “namaz” is the Persian / Urdu word for the prayer itself. In other places she uses familial terms like “virji” and “didi” which are more commonly used in Hindu and Sikh families. Muslim families would be more likely to use Persian or Urdu equivalents, such as “bhai” and “baaji”/“apa”.
The book is structured into four parts plus a prologue. The main part is bookended by what seems to be an omniscient narrator, with first-person narratives by Kathryn and then Rashid in the middle. While I found the first-person sections useful for getting inside the heads of the characters, I thought the pacing dropped a little in the middle of the book, with Rashid’s section being much more drawn-out than Kathryn’s.


In summary this was overall an interesting read that offers a nuanced perspective on the war on terror and its repercussions on all societies involved, although it was unfortunately let down by inconsistent research and a propensity for stereotypes. I also felt it was mainly written for a white American audience, for whom the 'Look, "they" are just like "us"!' subtext would be a more interesting revelation.

Beneath The Same Heaven is by Anne Marie Ruff and published by Open Books.
Thanks to The Book Reviewers Program for the copy I received in exchange for an honest review.