Lockdown reading to take you to another world

The Ten Thousand Doors of January

January Scaller discovers she has a unique gift – that of being able to make things happen just by writing about them. While we all shut our doors during this pandemic, January is busy opening them. Doors to other realms and worlds, which call to her natural sense of adventure and send her on a voyage of discovery about her own roots. The trouble is, not everybody is happy about letting January into other worlds, or other worlds into ours. 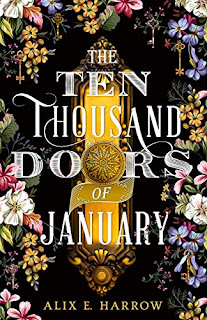 This was an enjoyable, book-lovers’ fantasy full of adventure, romance, humour and pathos. The fact that it had a female protagonist of colour was a major draw for me although this is secondary to the actual story.


The first thing that hooked me, apart from the gorgeous cover, was the language and writing style. Harrow’s use of metaphor and imagery is vivid, evoking scenes and emotions in bold strokes. Her sense of voice is sharp so that she manages to render a variety of distinct ones, whether it’s an earthy Kentucky twang, an imperious English tone, or a scholar’s measured explanations.


The main characters are brave and likeable – even the flawed heroine, January. But the villains are very clearly villains – and this is the only criticism I’d make of the novel. With the exception of maybe one central character, there is a clear demarcation between “good” and “bad” characters – and their motives - that might situate this book more on the YA side of the fantasy shelf. This is only a slight criticism from me though, as sometimes I do just want heroes I can cheer on and baddies I can shake a mental (or literal, if that’s how you roll!) fist at.


At its heart this is a book about writing, and reading. “Word-workers” do what writers do every day – opening “Doors” or portals to new worlds and experiences. As readers, we go through the doors and discover these new realms. There’s a long tradition of authors who have used the idea of portals to other worlds: Philip Pullman, C.S. Lewis, Lewis Carroll, even Enid Blyton. But Harrow links it directly back to the act of writing and creating stories. The only MG / YA author I can think of who does something similar is Cornelia Funke in Inkheart, although there it is the act of reading the story or book that takes one through to the other world.


One aspect of this that I found interesting was the idea that “word-working” takes a personal toll on the writer, depleting their vital energy. This might simply be a literal depiction of the idea of writing being a demanding process where you put something of yourself on the page, but when January is forbidden to write by the various people trying to control her, it also made me think of the very real cost of writing for different groups of people at different times in history – for instance African American slaves.


To me the most intriguing layer of the story is to do with colonialism, race, class and migration. Harrow explores how class privilege and race can intersect; she alludes to how colonisers amass wealth and status through the practice of looting cultural artefacts and resources from colonised peoples; she highlights the enslavement of subject races; she even critiques the type of nationalist isolationism that fears immigration and encourages the closing of borders / Doors to others, and which we are seeing such a resurgence of in our own world. I thought this in particular was brilliantly done, as so many of the fears around immigration completely ignore the role that colonialism has played in facilitating migration. But far from getting up on a soap-box, Harrow just weaves it into her tale, giving us a thrilling narrative full of emotion, twists and pithy dialogue.


It’s a well-paced, engaging odyssey that I thoroughly enjoyed. I loved January’s personality and all her sidekicks, I was drawn into the emotional turmoil she experienced on her journey and I would certainly read any further adventures. In the meantime, I'm waiting to read her next book, The Once And Future Witches.

Thanks to Netgalley for sending me a copy in exchange for an honest review.


The Ten Thousand Doors of January is by Alix E. Harrow and published by Orbit Books.


The Once And Future Witches is out in October 2020 and published by Redhook.