A Love Letter to Food, Faith and Family: To Lahore With Love, Hina Belitz

Newly-wed Irish Pakistani Addy is a gifted cook and aspiring chef. She hopes to open her own restaurant one day or work for a Michelin-starred restaurant, and is married to the man of her dreams, Gabe. When her marriage comes under strain, Addy, her devoted Nana and her best friend Jen take a trip to Lahore to reconnect with Addy’s Pakistani family. There, she learns about how to accept the bad with the good in life, and to let go of what she can’t change, as well as discovering some truths about her own extended family. 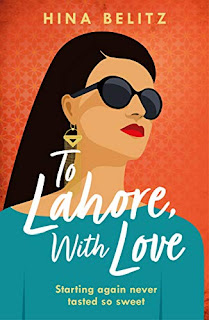 This is a readable, simply-written novella that on the surface follows all the familiar conventions of chick-lit: hopeful young woman, dastardly handsome man, breakdown of relationship and the subsequent journey of self-discovery as the heroine searches for the strength to move on. However what stops it from being just another chick-lit novel for me was its focus on two things: the alchemy of food to transform our emotions, and the influence of faith and spirituality. This infusion of mysticism and magic realism is, I think, unusual in this genre and possibly not for everyone, but it worked for me.


My favourite thing about this book (and this may or may not have something to do with the fact that I read it while fasting) are the sumptuous descriptions of food. Each chapter opens with a recipe for a dish that is also supposed to be a stimulant for positive emotions like love or happiness, or a cure for various emotional ailments such as sadness, anger, or guilt. The recipes have names like “Unpleasant-Cancelling Lentils” or “Love Me Forever Lamb”, and they also detail the flavours and textures of the dish, its “artistry” – the powers that make it work, and its purpose. The descriptions are sensuous and tantalising and for me were the most enjoyable part of the book, along with gems such as “garlic bread is the infant child of the muscular Adonis that is chilli chutney.” I quite agree!


The author takes you on a journey to another place and culture, which I enjoyed reading about, although I felt it was sometimes in danger of slipping into clichés painting the streets of Lahore as a rural backwater. For instance, “A man in dirtcoloured clothing stood behind a single wooden cart, piled impossibly high with fruit and vegetables. Behind him, a glass-eyed ox stood lazily eating scraps of mangled green and brown herbiage...” Sigh.


Where I felt a little more let down by the writing was in the unevenness of the characterisation. While Nana shines through as an eccentric, devoted tour de force with the added complexity of life experience and mistakes, everybody else is a little flat. Addy’s mother comes across as bitter and cold, Addy herself was a bit too self-absorbed and at times histrionic for my liking, and Jen feels like a spare part for much of the book. Without giving away spoilers, I felt that the characters’ motivations were not always convincingly or thoroughly explored enough.


I also had trouble with the “accept everything” mantra. The book opens with a quote by Nietzsche referring to amor fati; this philosophy clearly underpins the narrative, but I think Addy could have had more of a struggle to get to that point, as she appears to be quite passive and lets go of her grievances pretty much immediately. Part of the problem here is that Belitz appears to resort to telling instead of showing. For instance, “It was amazing to me how quickly a new environment, new people, a new country could change my outlook...” Her entire transformation is summed up in a sentence or two and I would have liked to have seen her encounters with the environment and the people a little more fleshed out before this statement.


Overall, this is an enjoyably light read with some deliciously descriptive food-writing. The romance isn’t for me but it would make the perfect beach read (if any of us were going on holiday!).


Thanks to Netgalley for sending me a copy in exchange for my honest review.

Brown Brontë rating: 3 out of 5 stars.