Misogyny, corruption and family ties: You Beneath Your Skin, Damyanti Biswas

June 01, 2020
In her tautly-written debut, author Damyanti Biswas explores the misogyny, corruption and social inequalities that exist in Delhi’s seamy underbelly. Dark and atmospheric, the book sits within the Indian noir genre that has inspired Hindi movies such as Mardaani and Talaash. It follows psychotherapist Dr Anjali Morgan as she juggles her work at a women’s project in inner-city Delhi, with her complicated personal life: her fraught relationship with her teenage son Nikhil, who has autism; her friendship with Maya who runs a small detective agency, and her on-off affair with Maya’s brother, Special Crime Commissioner Jatin Bhatt. When the three of them begin to work on a case solving a spate of grotesque murders in which slum women are raped and killed, their faces disfigured with acid, it exposes old scars and creates new ones in the personal lives of the main characters. 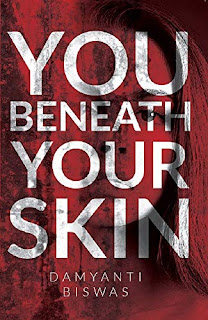 With her brooding writing style and the narrative split between multiple viewpoints, Biswas skilfully lays bare the hypocrisy infecting families and institutions; the toxic masculinity that enables some men, even from a young age, to feel so entitled that they can carry out hideously violent atrocities on women, and the privilege that allows certain classes to exploit others with impunity. She also explores society’s (and perhaps Indian society’s in particular) obsession with perfect appearances – whether that’s physical appearances or one’s status and standing in the eyes of their peers and community.
The title therefore works on two levels; it refers to the characters who find that other people’s perceptions of them and their outward appearances do not add up to who they really are. But also as a wider comment on the veneer over the worst aspects of society; the tension between morality and materialism eventually gives way, ripping apart the thin veil cast over society’s flaws, and exposing the ugliness beneath.
There are plot twists aplenty, although they are set up for discerning readers to be able to unravel them before the characters do. But this did not detract at all from what was, for me, still a dark and gripping read. It compels the reader to confront the worst of what human nature is capable of, but also offers optimism in showing that we can still redefine ourselves on our own terms.
Not only is this a hard-hitting but thoughtful read in its own right, I was also impressed to learn that author proceeds from this book go to two Delhi-based charities dedicated to educating street children, and helping survivors of acid attacks.
Brown Brontë rating: 4 out of 5 stars.
You Beneath Your Skin is published by Simon & Schuster India and is available for UK readers on Amazon.