For South Asian Heritage Month I'm sharing more translated extracts from Jahanara Imam's memoirs of the 1971 Bangladesh Independence War, Ekattorer Dinguli. The translation is my own. I chose these excerpts because I love the way Imam has captured the personalities of Niranjan and Chaitanya - the Hindu handymen she is sheltering and employing in her house. It also alludes to the perils of living in a country under occupation and at war, and the particular fear felt by the Hindu population of Dhaka at the time. I like the way these two entries show how the independence struggle united Bangladeshis across class and creed, while also showing the conflicts with other ethnic groups; it's worth remembering that East Pakistan / Bangladesh is often the forgotten casualty of the 1947 Partition, being left with its own legacy of religious and ethnic conflict.

'Muktijuddha', referred to here as 'Mukti' for short - freedom fighter

This morning Chaitannya arrived unexpectedly. Chaitannya is our long-standing trusty carpenter. He’s very honest and hardworking, so if any of our friends ever need any carpentry work done we send Chaitanya round without a second thought. You could say he is in fact too honest and straightforward, which is why he hasn’t been able to get very far ahead; sometimes if he’s in real difficulties he’ll come to us and ask us to find him work somewhere.

Seeing him now, we all exclaimed, ‘Well, Chaitanya, where and how have you been all this time? Didn’t you go to India?’

Chaitannya and his large family couldn’t just drop everything and go to India. And besides, there hadn’t been any direct military action in his village near Badda. They’ve managed to get by somehow, staying low and keeping out of sight. But there has been no work to speak of. They managed for the first few days. Now they’re going hungry for two meals out of three, so he’s screwed his courage to the sticking place and emerged out of hiding.

‘You’ve come at the right time,’ I said. ‘We have plenty of jobs that have been piling up in this house for you.’

Sometimes we hear rumours from Mirpur and Muhammadpur, that the Biharis are coming this way, looting and pillaging as they go. That sends the neighbourhood into a panic, and everyone is busy checking the locks and bolts on their windows and doors. We’ve also been thinking for a while that the frames on our two front doors need replacing. They’re so flimsy I’m afraid they can be broken with one good kick. And I’ve also been thinking for some time about taking out the glass panes in the dining-room and staircase windows, and replacing them with wooden panels instead. Even when the glass windows are shut, I don’t feel safe. I couldn’t find Chaitannya, and didn’t feel confident enough to call an unknown carpenter from New Market to do the work. Chaitannya coming here of his own accord has been a huge relief.

Chaitannya brought his nephew Niranjan along with him. In the past Chaitannya would always bring the pieces of wood himself. Now he said, ‘I’m scared to go to the shops. If Sha’eb could go and buy the wood?’ Chaitannya and his family usually stay wherever they’re working. When they worked for us, they would stay in the empty garage at the front of the house. The main gate runs along the side of this garage You can see it from the street. Now I’ve put them in a room in the servants’ quarters at the back of the house. Bura Miah lives in one of the rooms, the one beside it is empty.

Usually Chaitannya and whoever was helping him would work all day, stopping at midday to eat a bit of bread with sugar. In the evening they’d go to the market for food to cook. This time Chaitannya asked if Bura Miah would be able to buy some food for them, too, as they were afraid even to go to the market.

‘All right,’ I said. ‘You won’t need to cook for yourselves. You’ll eat with us. What, you won’t break caste by eating with us, will you?’

They work in the inner courtyard, and Bura Miah serves them their midday and evening meals of fish, vegetables and rice, in their room. They don’t step outside at all.

Niranjan has a lame leg. But his words are as pert as parched rice. Chaitannya is a man of few words, fewer smiles, and walks at a measured pace. Niranjan is the complete opposite. He scampers about on his lame leg, talks non-stop and laughs at the drop of a hat.

I often watch them at work, from a stool at one side of the yard. Niranjan’s hands work along with his uncle’s, and his mouth works along with his hands: what’s happening in Gulshan, Bonani, Badda – he knows those areas like the back of his hand.

Today he was saying, ‘Didima, have you heard? They’ve dug up Munim Kha’s grave?’

With an air of great confidence, Niranjan said, ‘the Muktijuddhas did it. They won’t let even the body of a traitor like him stay in this country.’

Chaitannya rebuked him sharply. ‘what rot you do talk Niranjan! Why do you talk so much?’

‘Aha,’ I interjected, ‘let him talk, I want to hear it. Chaitanya, you needn’t fear to tell me anything. My sons were also ‘Mukti’. Niranjan, how do you know so much about the Mukti’s?’

Encouraged, Niranjan said, ‘Well now why wouldn’t I know? Do we have any shortage of Mukti’s over there? Don’t they do actions, and carry ‘Stins’, haven’t I seen them myself?’

‘This urchin will be the death of me,’ Chaitannya said hopelessly. ‘He never stops talking.’

‘Don’t you worry Chaitannya. There’s no harm in telling me. He doesn’t go out anywhere. Go on, Niranjan. Tell me about the Muktijuddhas in your village.’

‘Oh, we don’t have muktijuddhas in our village. But there are some in the neighbouring villages. We hear about them. Lots of boys have been terraining at Agartala. It was one of our boys that killed Munim Kha’. I know all about it.’

Suddenly intensely curious, I said, ‘What do you mean? One of your boys? Do you know for certain that the killers were Muktibahini boys?’

‘Yes, they’d come back from terraining at Agartala. They carry Shtins. They carry gernades. Looks exactly like a pineapple.’

‘Not with my own eyes. But I’ve heard tell.’ 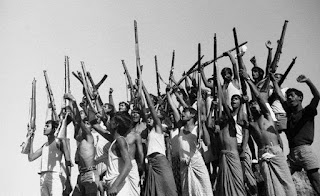