Racism & Reconciliation in 'Your House Will Pay': Review

July 14, 2020
A tautly woven story of the racial tensions between black and Korean communities in LA in the early '90s and up to the present day. Based on the true story of the killing of 15 year-old Latasha Harlins. 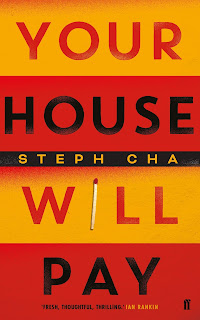 Author Steph Cha tells a balanced, nuanced story about growing up with racial prejudice and how we reconcile our relationships with the people we love, when they hold problematic beliefs. Reading this book in the wake of the Black Lives Matter protests this year gave it an added urgency for me as I felt so much of it was still relevant. Anti-black racism within other non-white communities isn't often discussed or acknowledged, but people have begun having those conversations recently, and so I thought this book was particularly timely. The descriptions in the book of people chanting 'I can't breathe' and 'say their names', at vigils and protests for victims of police shootings, might have felt prescient if it weren't for the fact that it just highlighted how, sadly, these situations are not new.
I didn’t know anything about the LA riots of 92, but after reading this book I got a sense of the complexities and mistrust between the different communities there. Cha also explores the effects of gang culture on black youth, the impact of incarceration on black families, and the challenges of rehabilitation to life outside the prison system.
Cha lets her characters tell the story without too many literary flourishes; her dialogue is convincing and I loved her portrayals of the dynamics between siblings, cousins and other family members. I found the details of Korean food and culture interesting, and I applaud the fact that the author has not otherized that culture by italicizing Korean words, or including a glossary or footnotes. The story is well-paced, with the narrative gathering momentum towards the big reveal (which may come as a surprise if you’re unfamiliar with the history), and then the denouement pulling us on to a crackling finale.
But what the author does best is present the motivations of the characters, without ever justifying them; she takes a moral position without ever making it seem like she is on a soapbox. This is a thin line to walk and she does it adeptly. You may start off judging a certain character, but Cha manages to make you feel sympathy, or at least ambivalence, for each of them in turn, and by the end of the book you are left with an awareness and sorrow at the far-reaching impact of hatred and violence, for all involved.
But there is also hope. It is a cycle of fear, mistrust and violence, but perhaps we are resilient enough, and generous enough, to break it.
Brown Brontë rating: 5 / 5 stars