The Tigers In The Tower - Julia Golding

Hello Brown Brontë readers! I have something very special for you today: a review AND a sneak peek of this brand new book: 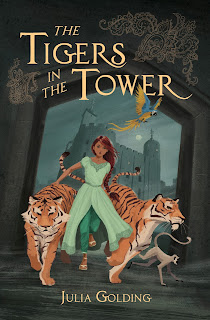 It was the gorgeous cover that first caught my eye; the girl with the brown skin and swirling red hair, flanked by those tigers, just ooze power and mystery. The book tells a beautiful tale about staying true to who you are, and overcoming adversity with the help of friends.

Read my review below, and take a look at the extract here.

Sahira Clive arrives in England with two Royal Bengal tigers that she must deliver to the Tower of London Menagerie. They are her last link to her home in India, and to her parents, who died on the voyage to England. Friendless and alone, she is forced to live in a grim orphanage; her one joy is being able to go and see the tigers at the Menagerie. But then, when the Menagerie is in financial troubles the tigers are to be sold. Can Sahira rescue them, and will her father’s family rescue her from the cruelty of the orphanage?

The Tigers In The Tower is an absorbing tale full of adventure, adversity, friendship and beautiful animals. Sahira is exactly the type of bright, outspoken heroine to appeal to fair-minded and compassionate young animal-lovers. The book has a wonderful cast of likeable friends and boo-hiss-worthy villains. I loved the fact that it featured a protagonist with an intercultural and interfaith family, and the passages that evoked the beauty of India’s natural world. The gentle humour offsets the hints of darkness in the novel, and a brisk pace with plenty of conflict and setbacks keep the tension building towards a satisfying conclusion.

There were one or two aspects that perhaps could have been thought through a little more. For instance, although I thought Sahira was a wonderful heroine, I found myself wishing she had a name other than 'Clive' as I couldn't help thinking of the troubled history associated with Robert 'Clive of India' (probably not something most children would notice!). I also felt that, while Golding took pains to show the particular influences of both parents on Sahira’s upbringing, the focus on her special relationship with her father somewhat overshadows her relationship with her mother. Richard’s words are often quoted whereas Noor-un-Nissa's are not; she has no voice in Sahira’s memories, and so we get less of a sense of her personality.

None of this takes away, however, from the many positive things in the novel. Golding deftly portrays the different characters' motivations for their actions - even those that aren’t morally right: there were many times I felt indignant for Sahira’s treatment by others, yet I couldn’t help but feel for the dilemmas facing Emily, Anne and even Sahira’s aunt. Sahira makes a positive role-model in being assertive and resilient, but also compassionate and generous.  Golding also sensitively examines the attitudes of sections of English society towards mixed-race Anglo-Indian children, which would make a great starting point for conversations with children about racism, prejudice, and British colonialism. I thought the cameo appearance by Charles Darwin was a brilliant touch, and the history of the London Zoo and the Tower of London Menagerie was fascinating. Regarding the latter, I’m in full agreement with one of the characters who declares, ‘His Majesty’s Keeper of the Lions – that sounds like the best job in the world.’ 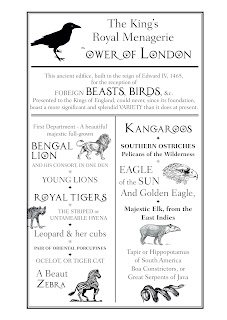 The Tigers in The Tower by Julia Golding is published by Lion Fiction .

Thanks to Netgalley and the publishers for the ebook and featured extract.