Back To School with The Demon Headmaster

How is it October already?! There's a chill in the air, the leaves are turning, and the kids have been back at school for a month, local lockdowns notwithstanding. It is actually great for them to be back in a learning environment with their teachers and friends, despite all the new restrictions. But the return to school has been amid some worrying news of political intervention in education, most notably the directives not to teach using materials from 'anti-capitalist groups'; being opposed to capitalism is now apparently classed as an 'extreme political view'. So it seemed like a good time to share this post I wrote - last year! I didn't share it then, for many reasons, but mainly because I was starting out on my blogging journey and was still riddled with self-doubt. I'm learning not to overthink things; I've realised that if I don't get over my fears and post, then often the moment passes -  and then I have to wait a whole year for things to become relevant again! But more on that in another post. 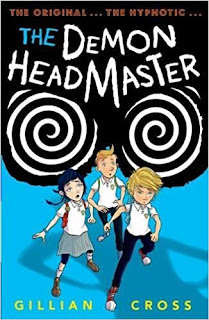 Last week I sat down with my kids to watch the new BBC remake of The Demon Headmaster. I remember reading the book and watching the original series at around the same age my daughter is now. At the time it was just a creepy story about schoolkids being brainwashed by a megalomaniac headmaster, and his army of dronelike Prefects. The new series gives it a modern twist by invoking the educational erm…CHALLENGES…resulting from policy changes in the last few years. It’s a story we’re all too familiar with: failing, underfunded school gets taken over by new administration, perhaps it’s forced to convert to an academy, and under new and inspiring leadership, the school begins to turn around. It forced a dry chuckle out of the teacher part of me when I saw the personality-less drones all repeating the same mantra ('The Headmaster’s inspirational; he’s really turned the school around!') and the empty mottoes flung about like authoritarian propaganda: 'every student is a star' and a lot of guff about wanting to help students be the best that they can possibly be (read, controlling their minds and behaviour to make the school look good, regardless of their own passions and goals). Who in education has not sat there partially lobotomized while leaders go on about the latest government-mandated initiative or catchy buzzword that is being adopted as a panacea for all the problems in schools?

For me, the original story by Gillian Cross seemed to be saying something about political intervention in formal education and the way it can stifle free thought, creativity and individuality. However it’s increasingly evident that many state schools are struggling with a lack of resources, finances and support from either the government or the local community. In the first episode we’re offered a stark contrast between the 'old' school, overflowing with litter and graffiti, bullies running rampant, school uniforms worn with a certain sense of 'whatever'-ness – a sense of a school that has given up on itself and its students. In contrast, the Headmaster has been responsible for clean and tidy premises, polite, helpful and neatly dressed students who take pride in their school. The kind of school that’s presumably a pleasure to work in, and one where parents are happy to send their kids. So what’s there to complain about?

I started to wonder if senior leaders watching or reading this would see it in a different way yet again. There they are trying to fulfil their responsibilities and moral purpose (which, in most cases, led them to become educators in the first place); improve the school’s performance, provide a quality education, and ensure students are safe and happy. But people won’t be helped; they don’t want to follow rules that would make things easier for all of us, and instead they’re actually 'demonising' (see what I did there?) anybody who attempts to 'turn things around'.

The key, I suppose, is choice. People can’t be dragged unwillingly to change. They can’t be told what to think. But some would argue that that’s precisely the role of formal education – to reproduce conformity to a system. In some respects this is true. I only hope that if we find ourselves in a situation where we're being brainwashed by ideology - whether that's political or pedagogical, we can be aware enough to resist the (figurative) hypnotic stares of those in authority and reassert our own views and voices.

With that thought, my son is now reading his way through the Demon Headmaster series; perhaps there's hope for the next generation!