Where Have We Come - Saz Vora: Review

Where Have We Come is the second book in the Reena and Nikesh series by Saz Vora, and picks up the story after the marriage of the couple, as they expect the birth of their first child. It follows Reena and Nikesh in their first year of marriage, through the birth of their severely disabled son, and, ultimately, coming to terms with his death, with the support of family and friends. Can their relationship stand the pressures of grief, shock revelations, and cultural prejudices? 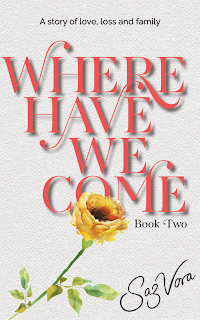 This is a touching novel that provides a strong contrast to the fairytale romance and Bollywood glamour of the first book, with its more serious tone and consideration of some weighty themes. If the first book had its head in the clouds, this one has its feet firmly planted on the ground. Author Saz Vora’s depiction of what it’s like to be the mother of a severely disabled baby is moving and honest, and it was this that kept me reading to the end.

What Vora does best is to take us through a mother’s gamut of emotions and thoughts. The feeling of numbness and disbelief, the readjustment of all expectations, the focus on practicalities when there is nothing else you can do - she captures every bit of the pain and shock that must arise in a situation like this. However she also portrays the joy that a new life brings, however short. Reena and Nik’s love for their son Amar is deep and strong and I loved the moments of light and tenderness, though bittersweet, when the three of them are just together, being a family.

It was those moments that added an extra layer of sadness to the drifting apart and eventual breakdown of Reena and Nikesh’s relationship in the lead-up to and aftermath of Amar’s death, even though the reader can see it coming. The two are not mentally on the same page because Nik is still as immature as he was when he and Reena got together, while Reena’s experiences as a mother have altered her priorities and outlook more drastically.

But rather than having the main characters neatly work through their feelings, Vora portrays their grief as being non-linear, which I appreciated, as it allows them time and space to go through a very necessary process of internal struggle and growth.

The main characters straddle two cultures - their Indian Gujarati background and their Western upbringing. Their position is shown to be a source of strength as well as conflict. So that while the traditional Gujarati food, music and certain customs bring Reena and Nik comfort, there are tensions between the older and younger generations, and between traditional and modern values. The cultural stigma often attached in Indian society to topics like disability and divorce, and the faith placed in superstitions will be familiar to many Indian readers, but you don’t need to be Indian to understand it, or to root for Reena when she fights against it.

This novel tackles important subjects from a South Asian perspective, and we certainly need more of those perspectives. Vora doesn’t shy away from highlighting the prejudices that exist in a lot of ‘traditional’ attitudes, for which I’m glad. But she also shows great affection for the beauty in her culture, and tries to locate problematic attitudes within the patriarchal society in which they were internalised. At the same time, this is not a novel about culture or identity; it is quite simply, a story about living life, making mistakes, and when the worst happens, finding the strength to keep going.