On a stormy New Year’s Eve, a solicitor’s clerk, Henry Newby, arrives on the doorstep of the Brontë parsonage in Haworth. He has been sent, by his uncle’s publishing firm, to retrieve an unpublished manuscript of the late Ellis Bell. While there, Newby finds some pages burning in the fireplace that he picks out and reads. He seems to think they relate a true account of real people, however it’s clear to the reader that they are the very pages that the publisher has sent him to collect, and appear to be a continuation, or elaboration, of the story told in Wuthering Heights. 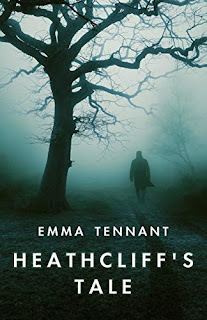 The novel is told through the writings of Henry Newby and the fragments of manuscript that he gathers, and is interspersed throughout with ‘Editor’s Notes’ from a fictional, unknown editor publishing these papers after Newby’s death. But we are never really sure who wrote them, or whether they are biography or fiction.

This is a gothic imagining of the untold parts of Wuthering Heights, drawn partly from things we already know about the Brontës, with a dark take on the experiences and events that may have inspired the figure of Heathcliff.

As a lover of origin stories, I was excited to read this one, especially with all the hints and theories about Heathcliff’s exotic background. But proceed with caution, as the novel is full of shifting points of view and competing, unreliable narratives which make it difficult to ascertain the ‘truth’. For example, it's well-known that Nelly described Heathcliff as a ‘Lascar’, which has made many readers imagine him as African or Asian. But Tennant has Heathcliff describe his first memory as being of “a country where it was white with snow nearly all year round”. I wasn’t aware slavers captured people from the tundra, but nevertheless he claims he is captured as a small boy and trafficked to Jamaica, from where he is brought to Liverpool on a slave ship. The rest is, as they say, history.

But is his version to be trusted? It’s not till near the end of the book when we’re presented with an alternative story, supposedly told by Nelly Dean, which puts forward another theory – that Heathcliff is in fact the illegitimate son of old Earnshaw by a ‘Lascar maid’ in a brothel. This opens up heavy implications for the relationships in the novel, but more on that later.

I did question some parts of it: the supremely ignorant and unreliable Newby had me doubting my own knowledge of Brontë-lore at several points – I wasn’t sure why Tennant had him believe that Emily was the youngest sister (he mentions this several times!) unless it was to highlight his lack of knowledge and reliability. Likewise when he maintains that Branwell and Emily made up the Gondal stories I had to check that I was right in thinking Gondal was in fact the game of Emily and Anne, while Charlotte and Branwell wrote about Angria. However, this might be a reflection of the fact that nobody knew about Anne’s talent until much later than the setting of this novel.

Hindley is far from being a sympathetic character in Wuthering Heights, but this was hugely downplayed here. We know about his mistreatment of Heathcliff, but his downfall at Heathcliff’s hands positions Heathcliff as the villain and Hindley as the victim. I’m not sure how I felt about that; they are both despicable in my opinion. On the other hand, Branwell's character got a raw deal. However, I enjoyed reading the story from Isabella's perspective.

I’ve always thought Heathcliff and Cathy must have had a physical relationship, but suggesting they were both Earnshaw’s children added a whole new layer of darkness to this already twisted story, especially with the marriage of the young Cathy and Linton. But then the last chapter entitled The Rape of Gondal, although tragic and horrifying, I thought did a massive injustice to poor Branwell. But then, WHO is the couple that Newby thinks he’s seen kissing in the courtyard of Top Withens?  Implying that Cathy and Heathcliff’s relationship was based on a similar passion between Emily and Branwell was too much of a stretch for me, but perhaps it makes sense to some readers in explaining their tortured souls, I don’t know. (In my opinion, we know now that clinical depression can run in families, and Charlotte and Emily were certainly prone to fits of despair. Men's mental health is something that has long been neglected, so it might make sense if Branwell’s substance abuse was a way of self-medicating; I’d like to read a story that takes this angle.)

What I enjoyed about this book was the use of heavily gothic, or Victorian gothic devices. The framing of the narrative by a legal clerk and the fears of supernatural forces of evil are reminiscent of Dracula, while the atmosphere, the melodrama, the dark passions, are all ramped up in the style of The Mad Monk or the Vicar or Wakefield. The influence of the juvenilia is also clearly present.

This story by Tennant is a dark and dramatic tale of forbidden passions, with an interesting use of source material and a layered narrative that plays with the reader’s perceptions right up to the last page.