March 04, 2021
This was one of my most-anticipated reads for 2021, and I am happy to tell you it lived up to the promise of its stunning cover. 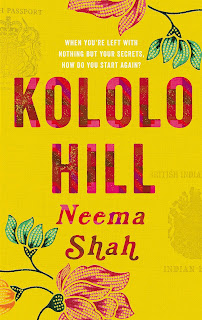 Kololo Hill follows an Indian Ugandan family as they experience the expulsion of Asians from Uganda by Idi Amin, in 1972. Those of you who follow my blog know that I'm always looking for South Asian stories, but I don't think I've ever read a novel about this particular episode in history.
The book is set in Kampala and London, where the family is forced to flee to. It is movingly-written, with evocative and sensuous descriptions of life in Kampala for the Asian community - the luxury and affluence, the natural beauty, and the glittering social events radiate warmth and richness from the page. The descriptions in this book are so fresh and immediate, I truly felt as if I were there in the heat and lush greenness of Kampala, or in the cold safety of the English army barracks.
Neema Shah convincingly renders the confusion and fear following Amin's expulsion decree, the horror and assaults at the hands of Amin's soldiers, but she tempers the reader's sympathy for the plight of the Asian population with a critical eye examining the reasons for the hostility towards them. Using the character of Asha as the clear-sighted conscience of the novel, Shah describes the latent snobbery and prejudice towards the black Ugandans, and the social segregation that meant that although their lives were connected, the Asians held themselves apart and never saw themselves as parts of a whole nation. She also examines the complex ethnic tensions between black Ugandans, and the fact that many of them were just as persecuted by Amin.
Shah's characters are full of personality and heart. But the thing I most appreciated was the resilience of the female protagonists - young and old. Asha has her moments of despair but doesn't allow herself to be defeated. But it's Jaya who is the backbone of the family; Jaya, who left everything she knew to start again in a strange country, not once but twice in her life. It's astonishing to think that this was not a unique story for women like her, but probably a fairly common experience.
I also enjoyed reading about the positive responses of the British volunteers, who provided help and support to the newly-arrived Indians as they found themselves, cold and exhausted, on British soil. It was a reminder that, despite the numerous other examples of racism and hatred, there is decency everywhere, and always a reason to hope and work for a better life.
Without giving away spoilers, I did find the ending unsatisfying, as it ended on a note that was more bitter than I felt the characters deserved. I felt the reader did not get the chance to come to terms with a key revelation and we are left still reeling a little, when the book ends. It would have been nice to have seen some possibility for redemption or at least closure, but perhaps Shah felt that the enormity of that revelation did not warrant a redemption at that point.
That said, this did not detract from my enjoyment of the book as a whole. It transported me to a totally different place and time, taught me a little bit about history, and gave me characters that came alive and made me feel as if they were people I knew. A debut to be proud of, and one I'd recommend without hesitation.
Brown Bronte rating: 4 stars.
Thank you to Picador Press for this review copy.
Let me know what you thought of my review, and whether you have read or want to read Kololo Hill.