Love Poems by Hafiz & the Problem of Representation in Translation

This Valentine's Day I was excited to read these translations of some of the poems of the famous Persian poet Shamsuddin Muhammad Hafiz. The title - The Subject Tonight Is Love: 60 Wild and Sweet Poems of Hafiz -  is so fitting for Valentine's Day, although of course Hafiz was not just a romantic poet; his poems can also be read as spiritual, being addressed to the Divine. The poems in this volume certainly give a taste of the spiritual and emotional intensity that Hafiz is known for.

By Abolhassan Sadighi - Society for the National Heritage of Iran, CC BY-SA 4.0, https://commons.wikimedia.org/w/index.php?curid=86911865

However, I was disappointed to find that these translations by Daniel Ladinsky, published in 1996, were based not on the original Persian, but on the 1891 English translations of H. Wilberforce Clarke. It might be more accurate to say that they are translations of a translation. 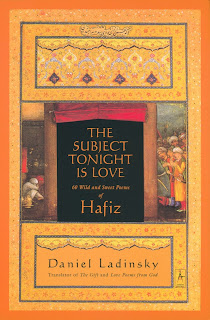 Since every act of translation involves a measure of interpretation, this in itself isn't a huge problem. But as someone who doesn't read Persian, I want to read something that is based more closely on Hafiz's own words, rather than a second-hand interpretation - and I'm sure I'm not alone in this. How else do you know whether what you're reading is a faithful rendering? But the issue in this case is that  the translator of this volume is himself not a Persian scholar; worse, he has not acknowledged any Persian language or literature experts who might have helped him with his understanding for this volume (if indeed he bothered to consult any), apart from one 'spritual teacher', mentioned in the introduction (and not by name, I might add). Instead, he relied on - and credited - the hundred-year-old translation of another dead white man.

Despite this lack of any real background in Persian studies or even time spent in Iran, Ladinsky has, according to the foreword in the book, been recognised by the BBC and other well-known figures such as Oprah, as an expert on Hafiz and Persian poetry. Let's just sit with that for a minute. A white American is hailed as an expert on a Persian poet, despite having no knowledge of the Persian language, and no first-hand experience of Persian or Muslim culture. Perhaps in the mid-nineties, there may have been a dearth of actual Persian experts (bit of a stretch but for the sake of argument let's go with it). But surely that is not still the case?

At a time when writers of colour and the global south are struggling for greater representation in publishing, to say that I'm disappointed that when I search for Hafiz in translation, Ladinsky is what comes up, is an understatement. His rendering is certainly lyrical, and spirtual to an extent, but devoid of the connection with Islamic and Persian culture that any reading of Hafiz should be conscious of. It's almost as if it's been sanitised of any overtly Islamic or cultural reference for a Western audience, similar to what has happened to the poetry of Rumi in translation. Cultural and spiritual appropriation, much?

Where are the modern Persian poets, the language experts, the native speakers, who are able to produce their own stunning translations, with a more immediate sense of the culture and history surrounding Hafiz and his poems? They are out there, but why are they not celebrated and published in the same way as Ladinsky? (perhaps they are, and I just don't know about them - in which case, let me know in the comments!)

A bit more research reveals that a lot of the 'translated' poems that Ladinsky has attributed to Hafiz are not even in fact translations of Hafiz poems; they are poems that he feels have been mystically transmitted to him in a vision. But then why does he not publish them as original poems, instead of claiming they were written by Hafiz? This whole experience has left me feeling incredibly frustrated.

If anyone knows any good translations I can read, which are actually based on the original poems of Hafiz, preferably by writers with a real foundation in Persian language and culture, or indeed if you yourself are one of those writers, please comment and let me know.