Authors, poets and academics gather together at the Jaipur Literature Festival to share their work and to bask in the adulation of fans. Rudrani Rana is both a fan and a writer, and brings her work in progress in a canvas bag to the festival: a manuscript of a novel, titled ‘UNSUBMITTED’. Not just any manuscript, however: this is something Rudrani has revised and rewritten over the course of most of her life, until only one sentence remains unchanged: ‘my body is a haunted house.’ Perhaps this will be the time she actually submits the great work of her life. 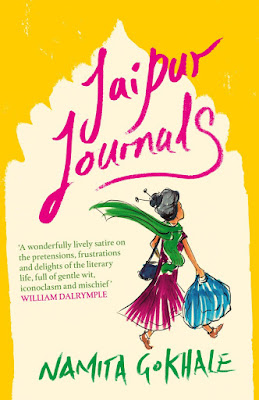 The book follows Rudrani and a small cast of other characters as their paths intersect and they experience their own epiphanies and life-changing moments at the festival. Anyone who has been to a literature festival or other literary event will recognise the descriptions of the performances, the panel discussions, the audiences. But this one seems to be a microcosm of the world outside, and the connections forged over the course of those few days are as intense as they are transient.

It was refreshing to see an older female protagonist at the centre of a book, and Rudrani is independent and memorably eccentric. Her penchant for writing lists and sending poison-pen letters in the form of cute cards depicting kittens and flowers, with harsh truths / accusations spelled out in purple ink, made me think of her as a cross between Vikram Seth’s Mrs Rupa Mehra and Shirley Jackson’s Adela Strangeworth – but without the maudlin streak of the one or the sinister side of the other.

The rest of the characters are not without their foibles either, so we have a tailor-turned-thief-turned-poet, an unlucky-in-love academic, and a gay journalist who goes saree-shopping with strangers. There’s even a tongue-in-cheek reference to Rupi Kaur fans.

Gokhale evokes a sense of the atmosphere and beauty of Jaipur – the distinctiveness of the landscape, the heat and colour of the city. She also gives a sense of the myriad unique stories bubbling beneath the surface of the seemingly ordinary people whose paths we cross every day in a bustling city like Jaipur.

I enjoyed this affectionate but teasing love letter to the Jaipur Literature Festival, and the way author Nimita Gokhale pokes fun at literary circles and the sometimes self-absorbed pretentiousness of artists and academics. The mix of humour and pathos in their behaviour and their stories reminded me of David Lodge in some ways, and it felt like Gokhale had an intimate knowledge of these events and the kinds of people who attend them.

I enjoyed it all the more because for 223 pages I could escape from our current reality and imagine myself at an actual literature festival, with actual human contact, rather than the virtual versions we have been compelled to have in the past year.

Recommended for anyone who loves and misses travelling, conferences, and the literary ‘scene’. Also anyone who has their own ‘Unsubmitted’ sitting in a drawer somewhere; take it out, dust it off, and send it out into the world before it’s too late.

Thanks to Anne Cater @RandomThingsTours and HopeRoad Publishing for sending me a copy to review.

March 30, 2021
Something special on the blog today, readers: I'm thrilled to be chatting to Kate Morrison, author of stunning debut A Book of Secrets, as part of its Random Things Tour. Join us as we talk about historical research, women's independence and racism in Elizabethan England. "A Book of Secrets is the story of a woman named Susan Charlewood living in Elizabethan England. Born in what is now Ghana, Susan is enslaved by the Portuguese but later rescued by British sailors, who bring her to England. Once in England, she is raised in an English Cathoic household. When Susan comes of age, the family marry her off to an older Catholic man, John Charlewood. Charlewood runs a printing press and uses it to supply the Papist nobility with illegal Catholic texts and foment rebellion amongst the Catholic underclass. When Charlewood, Susan takes over the business and uses her new position to find out more about her origins.  A look at racial relationships at the beginning of the eve of the
3 comments
Read more

Cut from the Same Cloth? Muslim Women on Life in Britain

June 05, 2021
So many times while reading this book I found myself nodding and saying ‘YES!’ I hadn’t realised how very rarely I come across a book, writers, voices, that speak to the entirety of my existence as a British Muslim woman; finding that book, those voices, was like letting out a breath I’d been holding, or feeling the relief of relaxing aching facial muscles that had been stretched in a smile all day. There was no need to pretend, no need to explain, no need to justify. What made this anthology of essays so different from the usual ones, was that they are not teaching or preaching, nor do they try to cater to an external gaze. These are British Muslim women writing their experiences and thoughts for women like themselves; women like ME. The essays in this book have been collected by Sabeena Akhtar, and include pieces by figures such as Suhaiymah Manzoor-Khan, Shaista Aziz, Yvonne Ridley and others. All of them are different in tone, style, and subject – some are academic or discursive, o
2 comments
Read more