It's been a while, Brown Brontë readers, I know. I've had so many other research and writing projects on the go that my blog has fallen by the wayside a little bit. I fully intend to try and post a bit more regularly now, but you've heard that before so I'm making no promises as to how often that will be. I will say that I've read and watched a bunch of stuff and I'd love to share reviews with you all, so watch this space.

For now, I'll start with my thoughts on "I Am No Bird," a dramatic and musical production by Stute Theatre, who are performing it as part of this year's Ilkley Literature Festival. 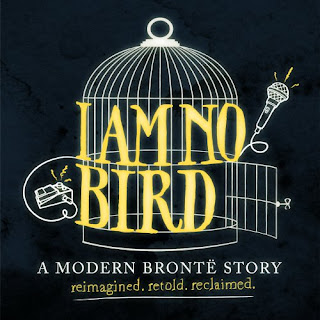 It's a lively little piece that explores what it means - and meant - to be a woman trying to make a living from the arts. It looks at the barriers to women's creativity, historical and current, and, spoiler alert, there's a lot that hasn't changed, depressingly.

The piece depicts three women trying to write and put on a show about the Brontës. They argue about the best way to portray the sisters ('if Emily were alive today, she'd be wearing jeans!); what the musical numbers should be like ('this is boring; aren't you bored?'), and whether Branwell should be part of the show or not. The dialogue is interspersed with musical renditions of the novels, and some of the particularly infuriating criticisms that Charlotte, Emily and Anne received, most notably from Robert Southey, who wrote in response to Charlotte's request for feedback on her poems, that 'Literature cannot be the business of a woman's life, and it ought not to be.' Urgh.

It did get a bit meta, with the actors playing actors playing the Brontës, slipping in and out of their characters' characters and addressing the audience from time to time. Perhaps that won't be everyone's cup of tea, but I was happy to play along for the evening.

I admired the energy and multiple skills of the three-woman-strong cast. They acted, sang and played musical instruments to accompany the songs, which ranged from toe-tappingly catchy to discordantly experimental. I loved the use of the motifs of birds and fire, because of their links with the novels. I loved the broad Yorkshire accents of the actresses, and the little dramatic tricks they used; such as making 'chatterboxes' out of newspapers and flapping them to parody the pearl-clutching reviewers who found the novels immoral, scandalous or distasteful. I also enjoyed the portrayal of Branwell as a mop with a pair of boots underneath and a bottle of whisky, although I was disappointed that there wasn't a more nuanced consideration of his character. There is one point where the sisters say something along the lines of 'he feels nothing,' but surely Branwell's problem was that he felt everything, and too much; he was a Brontë, after all. But that's another post, maybe.

There is a lot that will resonate with women who write and create art; the struggles of balancing domestic responsibilities with creative urges; the talking down to you by others who think they know better; the cultural expectations of society; the fact that people often don't see your work as 'work.' There is a point when one of the actors in her actor-persona has a mini-meltdown because her ex keeps calling her at work because he can't manage their children. Then there's dealing with criticism; when to take it on board, and when to stand by your art, succintly demonstrated by Charlotte and Emily respectively.

It might sound as if the play didn't say anything very profound or new, but the fact that these issues are still so familiar to us is, I think, the whole point; what has changed, really, in the past 200-odd years? Yes, women can publish under their own names now, but there are still instances when women in business and industry find people's attitudes towards them change drastically for the better, when they operate under male names. Virginia Woolf wrote, in the twentieth century, of the importance, as a woman, of having a room of one's own, to do creative work undisturbed. We know that women carry out the bulk of unpaid caring duties; that women's careers take a nosedive after having children; that the pandemic has seen proportionally more women giving up their jobs to take care of children and families. Even with the best will in the world, with the most supportive partner in the world, there are days when everyone just wants a piece of you and you just don't get the uninterrupted time you need to sit down and focus on a writing project. This is without even delving into how race and class intersect with gender to create additional barriers to making a living from art.

So, although the substance of the message in the play may not have been groundbreaking, the fact that I could still recognise myself and other women I know in those characters on stage, means there's still a lot of work to do.

March 08, 2020
Sultana’s Dream is a science fiction short story by the Bengali writer and activist Rokeya Sakhawat Hossain , which was first published in the Indian Ladies’ Magazine, Madras, in 1905.  It imagines the journey of a woman – Sultana - to a fantastical place called Ladyland, “free from sin and harm, where Virtue reigns supreme”. Here, the powers and spheres of men and women are reversed so that women are active in public life, and men are restricted to domestic duties.  The result is a utopia where there is no crime, violence or corruption. Their main diet is fruit; they use technology to carry out manual labour and grow crops, and flying cars to travel. Work is carried out more efficiently as women do not waste time smoking and talking, and they come up with innovative, non-violent ways of defending themselves against enemies. At a time when India was under British colonial rule and women’s emancipation had not yet become a reality even in Britain, Hossain satirised the patri
Post a Comment
Read more